E-Paper
Home Todays story Even during Guv Rule, no end to slackness on digitization of Civil... 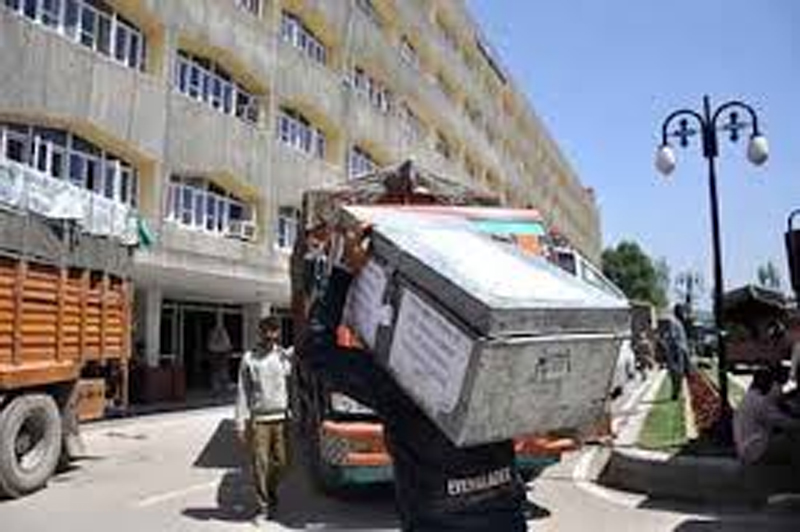 Decision taken in CoS meeting remains on papers only
File Tracking System yet to  be fully implemented
Mohinder Verma
JAMMU, Sept 16: Even during the Governor’s Rule there is no end to the slackness in implementing the decision regarding digitization of official record of all the departments in the Civil Secretariat, which otherwise is imperative to reduce huge expenditure on transportation of files during Bi-Annual Darbar Move and obviate the chances of wear and tear.
The announcements regarding digitization of record of all the departments in the Civil Secretariat were made by the successive Governments in the State a number of times in order to save huge money being spent on transportation of files during Bi-Annual Darbar Move. But translating these announcements into reality never received serious attention of the concerned authorities.
The necessity of digitization of record was again felt following devastating fire in a portion of the Civil Secretariat at Srinagar in the month of July 2013 in which official record of six departments and service books of over 300 employees suffered extensive damage. However, only deliberations were held in the official meetings on digitization of record but without any practical step in this regard.
The concerned authorities of the Government were again caught napping in September 2014 when official record of several departments suffered extensive damage due to flooding of Civil Secretariat at Srinagar.
Following the devastating floods, much hype was created over the decision to immediately start digitization of official record but the seriousness faded away within few months and the issue remained confined to the official meetings.
Late last year, the issue received the attention of the Governor’s Administration and accordingly deliberations were held in the several meetings of the Committee of Secretaries chaired by the Chief Secretary BVR Subrahmanyam.
Accordingly, the Information Technology Department vide Circular No.01-ITD dated January 11, 2019 conveyed to all the Administrative Secretaries that with a view to reduce expenditure and efforts involved in the physical transportation of files of all the departments in the Civil Secretariat during the Bi-Annual Darbar Move and also to obviate the chances of wear and tear of the paper documents and their loss, a considered decision to scan and digitize the complete official record of all the Administrative Departments in the Civil Secretariat was taken by the Chief Secretary.
It was also mentioned in the circular that the scanning and digitization of official files and records and storage in an easy-to-retrieve digital format through a tailor made Data Management System by authorized users of the files will be put in place.
All the Administrative Secretaries were further conveyed through the circular that back-end preparation in this regard has been initiated by the Information Technology Department and in the initial stage 7 to 10 departments shall be shortlisted for the purpose of scanning and digitization depending upon the capacity of the installed infrastructure.
They were asked to give their consent for being considered in the first phase along with the data relating to total number of files in the department, the number of files currently in use and approximate number of pages.
Shockingly, even during the Governor’s Rule no headway has been made on the digitization of official record of the departments in the Civil Secretariat, sources said, adding “what to talk of starting formal exercise in this regard even contract for the task has not been awarded till date by the Information Technology Department, which has to supervise the entire process”.
“Due to this, again there will be burden on the State exchequer during the transportation of official record during the Bi-Annual Darbar Move to Jammu from Srinagar next month”, sources further said while disclosing that Information Technology Department was supposed to complete scanning and digitization of official record of 7 to 10 departments within a period of one year but even after the lapse of nine months no headway has been made.
Moreover, File Tracking System is yet to be fully implemented in all the offices in the Civil Secretariat, which was introduced to improve efficiency, consistency and effectiveness of Government processes; to improve quality of administration, to establish transparency and accountability.
Despite several attempts, no contact could be established with Rigzian Sampheal, Commissioner/Secretary to Government, Information Technology Department. However, another officer of the department confirmed that contract for digitization work was yet to be awarded.