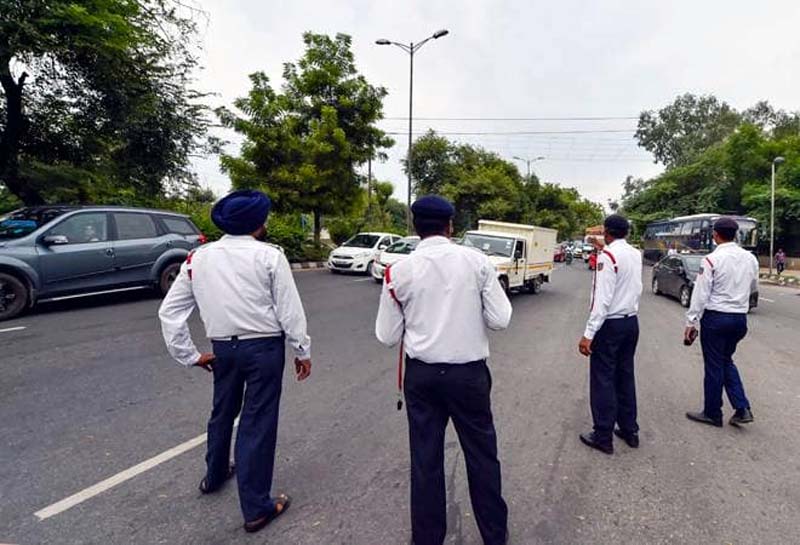 Nishikant Khajuria
JAMMU, Sept 16: Even as the State Transport Department has not issued the notification for implementation of heavy penalties under new Motor Vehicles (Amendment) Act 2019, the Traffic Police today resorted to challaning the violations under new provisions.
In winter capital of the State, the Traffic cops were seen in action at various points in the city and challaning the violations with heavy penalties under new MV Act, which proposes stringent measures like imprisonment and multiple increase in the fine for various offences.
Apparently aware of the illegality of imposing heavy penalties under new MV Act provisions without issuance of formal notification for the same by the State Government, the Traffic Police preferred to play safe and ordered only court challans for the violations.
However, at some places, a few non-locals were compounded on the spot for the traffic violations after they expressed their inability to attend the court for paying the fine. They were also compounded heavily under provisions and penalties of new MV Act.
When contacted, SSP Traffic (Jammu), Joginder Singh told the Excelsior that there was nothing illegal and the Traffic Police was empowered for challaning under new MV Act, which came into effect from September 1, 2019.
“We affected only court challans and let the court decides legality of imposing new penalties even as the Traffic Police did nothing against the law ,” he maintained.
However, on the other hand, authorities in the State Transport Department insisted that imposing new penalties for the traffic violations under Motor Vehicles (Amendment) Act 2019, without issuance of formal notification in this regard by the State Government, was illegal.
“Traffic Police is not above the law and the new MV Act will come into effect in Jammu and Kashmir State only after issuance of the notification,” said a senior officer of the Transport Department. Even the concept that all Central laws automatically come into force in the Union Territories, also does not apply in the case of Jammu and Kashmir, which is a State till October 30, 2019, he added.
Pertinent to mention that under the new Motor Vehicles Act, there are stringent penalties and multiple increase in fine for violation of traffic rules. From over speeding to traffic light jumping and to overloading etc, there is huge increase in the fine up to Rs 40 thousands and even imprisonment for the violations.
According to the amended MV Act, driving without valid license shall invite court challan only and a fine of Rs 5000 while a person with Learner’s License driving without being accompanied by a person having a valid DL shall be fined from minimum Rs 2500 to maximum of Rs 5000. Using mobile phone while driving will invite a penalty of minimum Rs 2500 and maximum of Rs 5000 while a fine of Rs 1000 shall be imposed in case of driving without seat belt or a person occupying the front seat in a four wheeler without wearing seat belt.
The commercial vehicles plying without Pollution Under Control (PUC) certificate will be seized and fine may extend to Rs 10,000 while non-commercial vehicles plying without PUC certificate will not be seized but a fine of minimum Rs 5000 and maximum of Rs 10000 shall be imposed for the violation. A fine of Rs 2500 to Rs 5000 will be imposed in case of jumping of Traffic lights or violating stop sign or overtaking from wrong side or driving against authorized flow of traffic while disobeying signal of Police officer regulating traffic shall invite a fine of Rs 1000 to Rs 2000.
In case of driving without helmet, pillion rider without helmet or triple riding, a fine of Rs 1000 shall be imposed besides recommendation to the concerned RTO for suspension of the Driving License. In case of drunken driving, fine up to Rs 10000 or imprisonment up to six months shall be the penalty in first offence while in second offence, the imprisonment will be up to two years and a fine.
Another significant new provision in the amended MV Act says that in case of a juvenile driving a motor vehicle, the guardian/ owner shall be deemed guilty and imposed a penalty of Rs 25000 besides imprisonment up to three years and cancellation of registration of the vehicle for 12 months. Further, the accused juvenile shall be declared ineligible to obtain learners’ license until the age of 25 years.