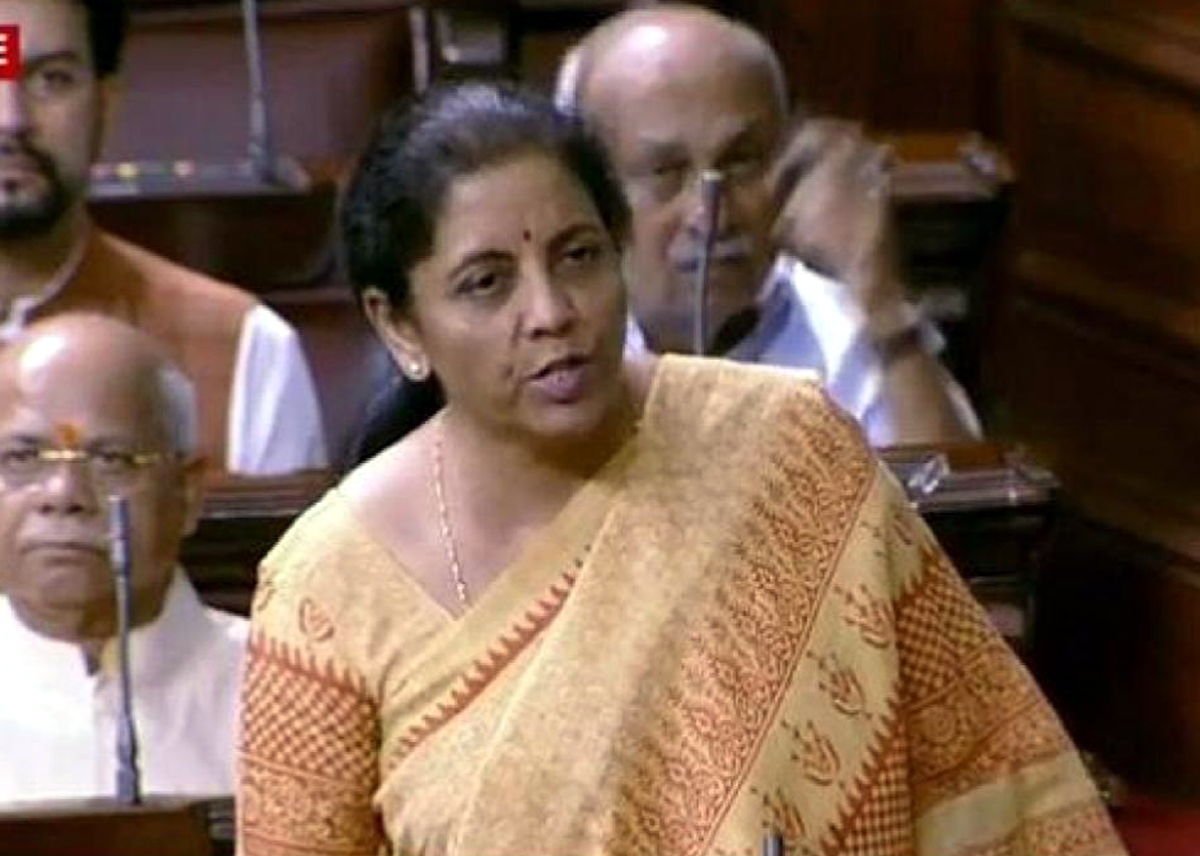 NEW DELHI, July 4:  India’s economic growth will rebound from a five-year low this year, but would need a huge boost in spending and reforms to accelerate higher rate of expansion to double the economy’s size to USD 5 trillion by 2024-25, the pre-Budget Economic Survey said today.
Stepping up private investments, exports and job creation will be key to achieving the target, the survey presented in Parliament by Finance Minister Nirmala Sitharaman said.
The real gross domestic product (GDP) growth, which slowed to a five-year of 5.8 per cent in the first three months of 2019 — well below China’s 6.4 per cent, is expected to rise to 7 per cent in the fiscal year 2019-20 that started in April, it said.
GDP growth was 6.8 per cent in 2018-19, down from 7.2 per cent in 2017-18.
Investment rate, which was declining since 2011-12, seems to have bottomed out and is expected to pick up in consumer demand and bank lending, the survey said adding that economic slowdown impacting tax collections and rising State expenditure on farm sector may, however, put strains on the fiscal front.
India is currently the sixth-largest economy in the world with a size of USD 2.7 trillion. It is expected to overtake Britain to become the fifth-largest next year.
Authored by Chief Economic Adviser Krishnamurthy Subramanian, the Economic Survey said investment (especially private), is the ‘key driver’ that boosts demand, creates capacity, increases labour productivity, introduces new technology, allows creative destruction and generates jobs.
At a media briefing, he said structural reforms such as ones in the labour sector are needed to bring in the much-needed private investment.
Also, Micro, Small and Medium Enterprises (MSME) sector needs focus as the bulk of the job creation and growth support would come from this segment.
The survey propagated the economics of “nudge” at the household level, judicial reforms to smoothen out enforcing of contracts, and investment reforms.
It put the fiscal deficit for 2018-19 at 3.4 per cent, but analysts expected a short-term realignment of the fiscal consolidation map with the deficit targets being marginally raised for the current fiscal in the Union Budget for 2019-20 to be presented by Sitharaman on Friday.
Subramanian, however, stressed on Government sticking to the fiscal consolidation path or risk crowding out investment due to large public borrowings.
While the survey has retained the fiscal deficit estimate for 2018-19 at 3.4 per cent, the general fiscal deficit — Centre and States combined — has been pegged at 5.8 per cent in 2018-19, down from 6.4 per cent in the previous fiscal.
Former Finance Minister P Chidambaram, meanwhile, quickly latched on to the document to say that the Government appears to be pessimistic about the economy as there are no sector-wise growth projections.
“It appears to me that the Government, speaking through the economic survey, is pessimistic about the economy,” he said in a statement.
“The economic survey flags (1) slowing growth, (2) shortfall in revenue, (3) finding resources without compromising the fiscal deficit target, (4) impact of oil prices on the current account and (5) recommendations of the Fifteenth Finance Commission on Central Government finances. I am afraid, none of these is positive or encouraging,” he said.
The expansion in the economy will be driven by investment and consumption, with political stability auguring well for the growth prospects, it said adding that the upside and downside risks to growth are evenly balanced with monsoon rainfall seen tipping the scales.
But for India to become a USD 5 trillion economy (more than double the current size) by 2024-25, it needs to sustain a real GDP growth rate of 8 per cent, which international experience suggests is possible only through a sustained “virtuous cycle” of savings, investment and exports.
“The political stability in the country should push the animal spirits of the economy, while the higher capacity utilisation and an uptick in business expectations should increase investment activity in 2019-20,” the survey said.
It said oil prices will decline in current fiscal, pushing consumption. Consumption accounts for about 60 per cent of the GDP.
“However, downside risks to consumption remain. The extent of recovery in the farm sector and farm prices will decide the push to rural consumption, which is also dependent on the situation of monsoon,” it said adding some regions are expected to receive less than normal rains, which could prove to be detrimental for crop production.
The survey suggested policies to unshackle MSMEs to grow, create jobs and enhance productivity. It also called for reorienting policies to promote young firms which have the potential to become big, rather than MSME firms which remain small.
The survey flagged the need to prepare for the ageing of the population, necessitating more healthcare investment and raising the retirement age in a phased manner.
Highlighting the immense potential of data of societal interest, the survey said data should be “of the people, by the people, for the people”.
Stating that low pay and wage inequality remain serious obstacles towards achieving inclusive growth, it called for legal reforms, policy consistency, efficient labour markets and use of technology focus areas.
Contract enforcement, it said, remains the biggest constraint to improving Ease of Doing Business ranking. (PTI)