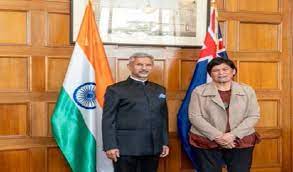 Auckland, Oct 6 : External Affairs Minister Dr S Jaishankar on Thursday held talks with New Zealand Foreign Minister Nanaia Mahuta and urged expeditious visa processing of Indian students desirous of studying in New Zealand. “Took up the issue of Indian students impacted by Covid measures. Urged expeditious visa processing of those desirous of studying in New Zealand now,” the Minister said in a thread on Twitter terming the talks warm and productive. “Warm and productive talks with New Zealand Foreign Minister Nanaia Mahuta this afternoon. Two societies, respectful of tradition and culture are seeking to forge a more contemporary relationship,” Dr Jaishankar said. “Will do so if we play to our strengths: Business, technology, digital,education, talent and agriculture. Can cooperate on pressing global issues including climate action, pandemics and maritime security,” he added in thread. Further, the External Affairs Minister said that he appreciated the exchange of views on international concerns such as Indo-Pacific and the Ukraine conflict during the talks. Value our working together in multilateral forums including the UN and Commonwealth, the Minister wrote. Dr Jaishankar, who is on a visit to New Zealand and Australia from October 5-11, is also scheduled to participate in an event on along with Prime Minister of New Zealand Ms Jacinda Ardern to felicitate members of the Indian community in New Zealand for their exceptional achievements and contributions. Both leaders will release India@75 postage stamps to commemorate and showcase Azadi Ka Amrit Mahotsav in New Zealand. Dr Jaishankar will also launch the book ‘Modi@20: Dreams Meet Delivery’. A book showcasing Prime Minister Narendra Modi’s special bond with the Sikh community ‘Heartfelt – The Legacy of Faith’ will also be released. Dr Jaishankar will also interact with several Ministers, including Priyanca Radhakrishnan, Minister for the Community and Voluntary Sector, Diversity, Inclusion and Ethnic Communities, and Youth, who is the first person of Indian origin to become a Minister in New Zealand, Parliamentarians, members of the business community as well as Indian diaspora,