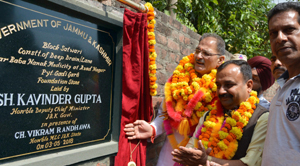 JAMMU, May 3: Reiterating Government’s commitment to provide better civic amenities to the people, Deputy Chief Minister Kavinder Gupta has said that massive development activities have been launched across the State to ensure safe drinking water, better sewerage, lanes and drains and hygienic surroundings in every nook and corner of the State.
This was stated by the Deputy Chief Minister after launching construction work of lane and deep drain near Baba Nanak Medicity at Azad Nagar Gadi Garh, which would be completed at an estimated cost of Rs 10 lakh; being executed by Rural Development Department (RDD).
He was accompanied by MLC Vikram Randhawa.
After launching construction works, he interacted with the local people and listened to area’s developmental issues.
Speaking on the occasion, he asked people to convey developmental requirements of their respective areas so that the works can be enlisted for execution by the Government on priority. He further informed people that the Government has already launched various development works to improve the status of civic amenities.
While listening to the problems of the people, he assured that all pending development works in the area including macadamization of inner roads, upgradation and construction of lanes and drains besides other development works of the area would be completed in a phased manner.
He also directed the concerned department to ensure that no compromises are made on quality of construction works, adding that regular monitoring is also being done to ensure no lapses.