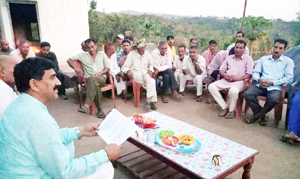 JAMMU, May 3: BJP, Member of Parliament Lok Sabha, Jugal Kishore Sharma from Jammu -Poonch Constituency visited village Gorda rural part of Nagrota Constituency today during his Sabka Sath Sabka Vikaas Yatra and sanctioned Bathing Ghat at village Gorda.
Jugal Kishore Sharma, Member of Parliament, while addressing the gathering late hours at village Gorda in Nagrota Constituency said that Narendra Modi has launched flagship programme Gram Swaraj Abhiyaan to empower the village especially belonging to the poor community. He said that every Member Parliament over the Nationwide has to stay overnight in village having majorly with SC community and to listen their problems. He appraised the Modi Government Schemes among the masses and advised them to take benefit of the schemes. He also took stock of implementation of the schemes whether the people are getting benefit from them. Jugal while listening to the demand of inhabitants sanctioned bathing Ghat for Village Gorda.
People welcomed Member of Parliament and complimented him for visiting Gorda and sanctioning Bathing Ghat from his MPLAD Scheme.
Senior BJP leaders Neelkunth,Paras Ram,Des Raj Sita Ram,Rajkumar,Vishal and others are also present at the occasion.