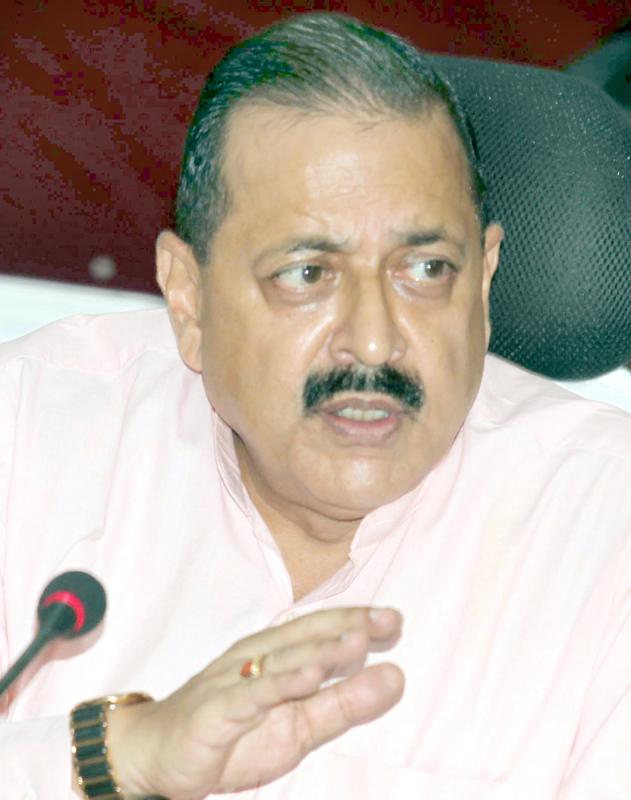 Excelsior Correspondent
NEW DELHI, Sept 20: Making a scathing attack on political parties which have decided to boycott the local body elections in Jammu & Kashmir, Union Minister of State (Independent Charge) Development of North Eastern Region (DoNER), MoS PMO, Personnel, Public Grievances & Pensions, Atomic Energy and Space, Dr Jitendra Singh said here today that there could not have been a more blatant exposure of the duplicity of these Kashmir-centric political parties than the fact that National Conference (NC) and others are vociferously opposed to the holding of local body and Panchayat elections in the State but they are equally vociferously demanding immediate dissolution of State Assembly and holding of Assembly elections at the earliest.
Speaking to media-persons on the sidelines of a programme for young Start-Ups, Dr Jitendra Singh recalled that soon after the BJP withdrew support from the coalition Government on 19th of June this year, the National Conference vice president and his team launched a sustained campaign on Twitter as well as other media outlets, demanding immediate dissolution of State Assembly and holding of mid-term Assembly election at the earliest.
At that time, he said, not even once did they express any concern related to 35-A or the situation not being conducive for the holding of an election. Ironically, however, within days, when the proposal to hold local body and Panchayat elections was announced, the same leaders declared their decision to boycott the election for reasons related to 35-A etc, he quipped.
Dr Jitendra Singh challenged the leadership of these parties to clarify whether they are still in favour of dissolution of State Assembly and immediate Assembly election or will they now revise their stand in the wake of the position they have taken and the reasons they have cited to boycott the local body and Panchayat elections.
Taking a dig, Dr Jitendra Singh said, it is now obvious that these political parties are ready for Assembly election in a bid to grab Ministerial berths if possible, but they are not ready for Panchayat election which will result in handing over power to the popularly elected Panches and Sarpanches.
Reiterating that the people of Jammu and even the Jammu-based workers of these Kashmir-centric political parties are feeling suffocated by the decision imposed on them by the party’s family hierarchy, Dr Jitendra Singh said, BJP will go for Municipal election and Panchayat election in full strength and also expose before the people, the self-centred approach of the political parties which neither follow values of democratic propriety for public nor the values of inner-party democracy for their own workers.