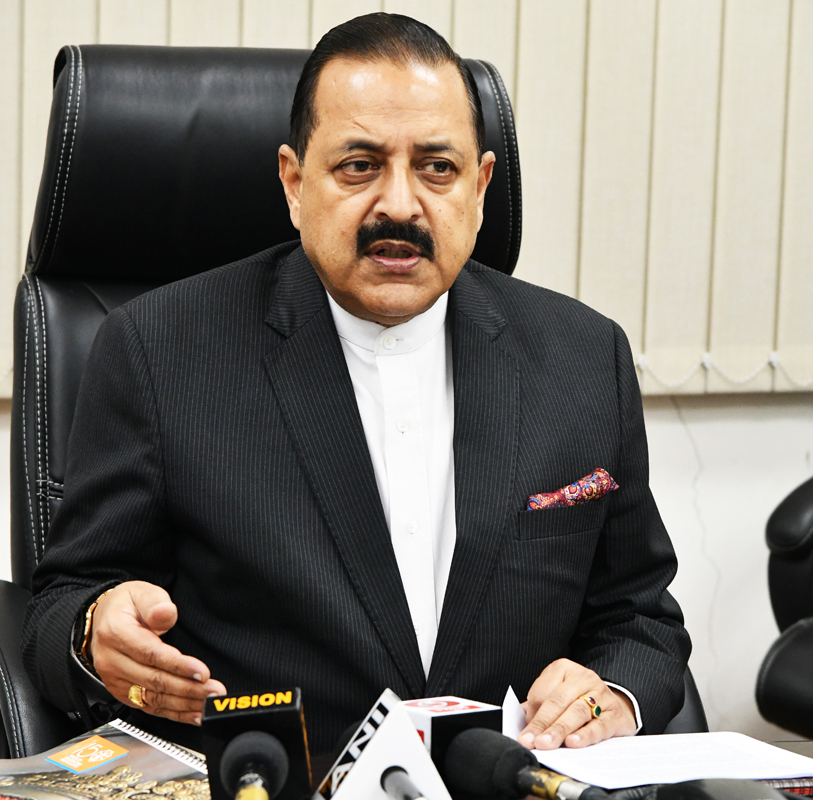 Avtar Bhat
JAMMU, Jan 15: Lambasting the political parties supporting the former students of JNU, who are posing a grave threat to sovereignty and integrity of the country, Union Minister in PMO, Dr Jitendra Singh today demanded a thorough probe into the role of former JNU students and their Kashmir connections.
Talking to reporters at a party programme here, Dr Jitendra Singh said that even the probe needs to be held regarding the possible links and connections of the gang with Kashmiri separatists and terrorists.
Terming the gang a group of misguided youth which is used by the opposition parties with the sole agenda of ousting Prime Minister, Narendra Modi, Dr Jitendra Singh said “I don’t think that nation can afford such kind of anarchic activism of opportunist misguided people to usurp the democracy in the country and challenge the national sovereignty and integrity”.
While criticizing the former Chief Minister and People’s Democratic Party (PDP), president, Mehbooba Mufti for saying charge sheet filed against Kanaya and others in JNU case is being done by BJP eyeing 2019 Lok Sabha elections, Dr Jitendra Singh said this way the PDP leader was questioning the Indian judicial system and process. “By saying so she was supporting those who are trying to break India,” he added.
“How Mehbooba can deny the slogans raised by former JNU students when you have documentary proof”, he said, adding there are videos as well as audios for the evidence” .
Dr Jitendra Singh said it does not justify your statements when you on one hand say that we have faith in Indian judicial system and on the other hand you question judiciary.”
The Union Minister said “no doubt we have ideological differences but at the same time the nation can’t afford anti nationalism.” He said in United States, United Kingdom and other democracies of the world the activities challenging the national unity and integrity are not tolerated and such forces are seriously dealt under law. He favoured that such activities should be banned in India also so that no one raises a head to challenge the sovereignty and integrity of the country.
Dr Jitendra Singh, while commenting on Mehbooba’s statement said she has not spoken this when she was in power and after losing the power she was trying to hoodwink the people as has been common with Kashmir centric parties. “The people of Kashmir especially the youth are mature enough to see through this game plan and they can’t fall in the trap of the dynastic parties who exploited them for their vested interests during last seven decades,” he added.
The Union Minister said that Kashmiri youth have reached far ahead and they want to become the part of development process started by Prime Minister, Narendra Modi Government all over country so that they do not lag behind.
Dr Jitendra Singh asked Kashmir centric and dynastic parties that how long they will exploit the sentiments of the people on anti India rhetoric. Instead of misleading the people the Kashmir centric parties should speak truth and apprise the people of reality for restoration of peace and normalcy in the trouble-torn Valley, he added.
The Union Minister said that such an exploitation of dynastic parties has been a past practice now and “I don’t think there are any takers for the same especially among the Kashmiri youth”,.
On the establishment of Law University in the State, Union Minister said that Centre has not received the proposal from the J&K Government in this regard as yet. He urged the State Government to send a proposal to Centre in this regard and assured that the process will be expedited in sanctioning the University after Centre receives the proposal.
Earlier Dr Jitendra Singh met a cross section of partymen, Sarpanchs and Panchs from Kathua, Doda and Kishtwar districts and highlighted the achievements of Narendra Modi Government in last four and half years.
He said Modi Government took historic decisions for development of country and upliftment of weaker sections of the society by launching various pro poor policies and schemes.
He said granting of 10 percent reservations to economically weaker sections of society, distribution of LPG among the poor, launching of various insurance schemes, opening of bank accounts with zero balance, sanctioning of industrial package for J&K, compensation to POJK and West Pak refugees, grant of reservation benefits to people living along IB at par with LoC, construction of toilet blocks in border belt and community bunkers are some remarkable steps taken by this Government for welfare of the people. He said three tunnels have been sanctioned for Doda -Udhampur districts and they will prove a game changer for this hilly belt after their construction.
Dr Jitendra Singh asked the party men to counter the opposition propaganda by keeping the real picture of development done by Narendra Modi Government before the masses.
The meetings were coordinated by BJP leader Sanjeev Sharma, BJYM National Executive member, Bharat Sharma and Divender Wazir.
The delegations also apprised Dr Jitendra Singh of various issues pertaining to their respective areas and he assured them that all possible steps will be taken for their solution.