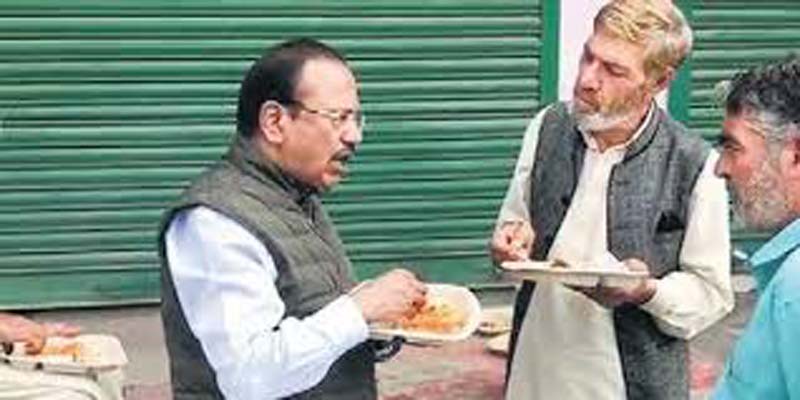 SRINAGAR, Aug 16:  National Security Advisor Ajit Doval today returned to Delhi after spending 11 days in Kashmir valley to ensure smooth implementation of plans after the withdrawal of special status accorded to Jammu and Kashmir, officials said.
Doval, who came here on August 6, took charge of security and development-related activities with a special focus on ensuring that there was no loss of life, they said.
During his stay, the NSA took a round of Shopian, a district worst hit by terrorism, and met locals and security personnel.
Visuals of Doval having lunch with locals, with closed shops in the backdrop, at an undisclosed locality were circulated in the media. He was heard saying in the video that once the new administration is set up, things will change.
He also addressed personnel of the Jammu and Kashmir Police, CRPF and Army separately, telling them about their successes in disturbed areas and underling their importance in ensuring the safety of the country and citizens.
The officials, while commenting on some adverse news reports about his visit to Shopian, said one cannot take away the credit that he visited the place.
The officials said that the NSA had to ensure that there is no loss of life and damage to properties as well as to see that the morale of troops on the ground is high, and he has been successful in that.
Doval, during his meetings, conveyed in clear terms that there should be no inconvenience to the people in general public.
During his stay in the city, he also toured downtown areas, including the sensitive Eidgah locality, which is notorious for incidents of stone pelting at security forces.
The NSA also ensured smooth coordination between all arms of security forces in J-K and getting them with available intelligence inputs for smooth operations in the hinterland as well as along the line of control.
On August 5, the Government announced the decision to abrogate special status of Jammu and Kashmir under Article 370 of the Constitution, and dividing the State into two Union Territories. (PTI)