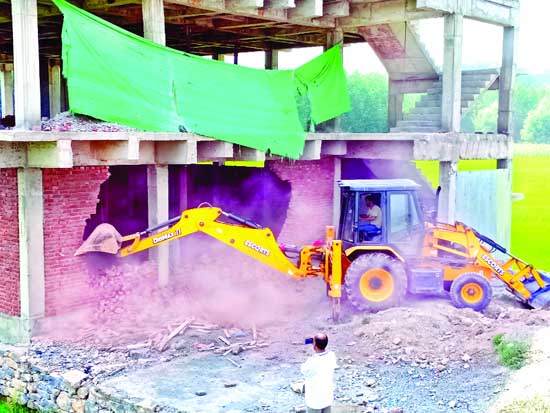 Fayaz Bukhari
SRINAGAR, Aug 6: Taking cognizance of news story by Excelsior on illegal construction of a multi-storey Nursing Home on the National Highway (NH-44) in Anantnag district of South Kashmir in violation of ban on the constructions along the newly constructed Highway, the Divisional Commissioner Kashmir today ordered its immediate demolition.
Divisional Commissioner Kashmir, Baseer Khan, ordered the Deputy Commissioner Anantnag to depute officials immediately and demolish the multi-storey building. He asked the DC to demolish the building and send its photo evidence in the evening.
The Divisional Commissioner’s order (No. DivCom/LRS/2018/5667 dated 06-08-2018) said that the Nursing Home building was constructed without seeking the NOC from National Highway Authority. The order read: “A news item carried out in the Daily Excelsior dated 06/08/2018 with the above caption (Political-bureaucratic-businessmen nexus behind violations, Govt bans, allows constructions on NH-44). It indicated that a Nursing Home is coming on the sides of the National Highway in violation of the ban imposed by this office vide No. DivCom/IAS/1566(E)/2827 dated 17.06.2017. Deputy Commissioner Anantnag vide No. DCA/SC/17/584 dated 05-07-2017 mentioned clearly in his communication that permission for construction (if granted) by the Government should be strictly subject to the NOC from the National Highway Authority of India which in this case has not been obtained.”
“Now, therefore, as instructed on phone, you will ensure that a team of officials is deputed to the spot immediately and the structure in question demolished forthwith and compliance reported in the evening along with photographic evidence. The notice which has already been served upon the violators be send to this office for record and reference”, the order read.
The Nursing Home at Semthan in Bijbehara area of Anantnag district was being constructed by one Khursheed Ahmad Zargar son of Ghulam Qadir Zargar of Bijbehara. The family of Zargar, however, said that they have received no prior notice from the Deputy Commissioner or any other official for the building being illegally built.
After receiving demolition order of the building, a team of officials led by Additional Deputy Commissioner Anantnag, Tehsildar and Naib Tehsildar of Bijbehara reached the spot this afternoon along with the bulldozers to demolish the structure. However, as soon as they started the operation, they faced resistance from locals and fearing law and order problem they withdrew.
However, an official said since “it is a frame structure it needs heavy machinery to demolish the building”.
“We will come with police protection and heavy machinery and demolish the building as per the orders of the Divisional Commissioner”, he said.