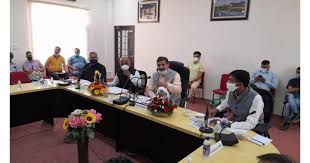 In order to give a push to better coordination among elected representatives of Parliament, local Governments, district authorities and other concerned Government agencies etc for efficient and time bound developmental programmes and to ensure there was participative governance , District Development Coordination and Monitoring Committees (DISHA) have been formed which have to meet at regular intervals but not less than at quarterly levels. Since the main purpose is to promote deliberative democracy and thrust on overall development , therefore, appraisal of various ongoing projects is made , information about targets and their achievements made known, introducing newer projects and sharing information about them and the like are deliberated upon , shared and vital information given and exchanged.
DISHA committees have, as such, adequate powers to seek important information and demand effective monitoring and follow up on issues raised in these meetings. Like this, a connect between the last quarter’s meeting and the present one gets established by dint of what latest status was in respect of different projects in terms of their completion . Hence responsibilities, achievements , follow up and the like are projected in a manner to look DISHA really participative and people centric.
In respect of District Reasi, while chairing a DISHA meeting, Union Minister Dr. Jitendra Singh, who represents Udhampur constituency , it was announced that Holy Katra town was going to be developed in a major way under Pilgrimage Rejuvenation and Spiritual Heritage Augmentation Drive (PRASHAD) scheme at a cost of Rs.52 crore. In this connection, the other way looking at it would be realising the unprecedented importance of Katra town in respect of religious tourism related to the world famous shrine of Shri Mata Vaishnodevi , which in various ways and forms was vastly contributing to generating multiple commercial and trade activities besides playing a tremendous role in generating employment avenues. For that purpose , it was important that massive infrastructural development took place and this amount , therefore, was proposed for that very purpose only.
In DISHA meetings , it is incumbent upon those participating to list out sector wise and detailed power point presentation of various ongoing developmental works in the district executed by all such UT departments which were directly connected with the people like power, drinking water, education, health , agriculture – direct and indirect – etc. Social Welfare Department , Rural Development Department , District Industries and Commerce like Departments must , therefore, be not repeating past ”achievements” but must be coming up with what new they had to present in which sector performed or presently were working on them. That is precisely for the reason of arriving at the requisite data of development on comparative basis. We note that the Union Minister duly stressed upon the importance of improving the position of performance in key sectors like Power, Water , Health and Education besides others as in respect of these sectors of vital importance, vigorous steps are needed on constant basis to be taken for basic improvement.
The fact of the matter is not looking at DISHA meetings also with utopian hopes and expectations from all factor endowments of the governance system but it is a platform also meant to list out genuine difficulties faced by the various connected departments like infrastructural deficiencies -shortage of staff , non-releasing of payment owed by the Government to different agencies, resolution of issues regarding left out works not completed and host of problems faced by the concerned departments. Since it is a wide forum with adequate and pointed representation as is mandatory for participative democratic process , redressing mechanism too must be activated so as to leave no chance for any alibi for non performance.