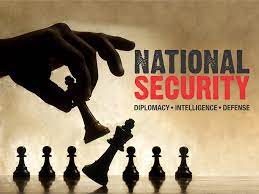 Hostilities standing over in a threatening way from two belligerent neighbours and even from certain forces from within to some extent , it was extremely important that the policy of bolstering national security was accorded top most importance by the Government. For that purpose it was incumbent upon the Government to keep the Defence Budget duly allocated with funds to upgrade its all requirements and needs for acquiring state-of-the art weapons and latest equipments including in areas of promoting digital technologies and initiatives which have become imperative in the present day requirements. Come what may India has to become one of the militarily strongest countries.
Union Defence Minister confirming this stand of the Government has accounted for providing Rs.5.25 lakh crore to the Defence sector during the current fiscal while launching several digital initiatives for the Defence Accounts Department (DAD) thus reiterating the stand of the Government to keep national security and connected issues at its top most priority. DAD on its part too, must keep releasing funds in time preceded by taking speedy but highly discretionary decisions so that in no way whatsoever the combat readiness of the country to meet the lurking threats got adversely impacted. At the same time , the nation must leave no stone unturned in ensuring interests of the serving personnel were keep paramount as also ex-servicemen and their families not only during the soldier’s life time but even thereafter.