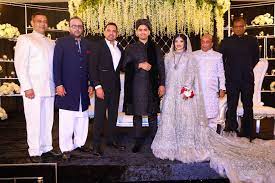 Washington, Oct 4: Indian National Congress leader Priyanka Gandhi’s husband and businessman Robert Vadra attended the marriage function of an eminent Indian-American from Chicago.
The wedding of Iram Shareef, daughter of Chicago-based businessman Iftekhar Shareef, last Friday at the popular Shalimar Banquets in the city was attended by eminent Indian-Americans, including Bharat Barai and Congressman Raja Krishnamoorthi.
“Robert Vadra presented a special congratulatory message signed by Gandhis to Iftekhar Shareef,” said a media release issued on Monday.
The media release carried a set of pictures of Vadra attending the marriage ceremony.
In one of them, Vadra is seen presenting a letter to Shareef signed by his wife Priyanka Gandhi.
Shareef, who is from Andhra Pradesh, is the president and CEO of National Bankcard Corp, according to his LinkedIn profile. (PTI)