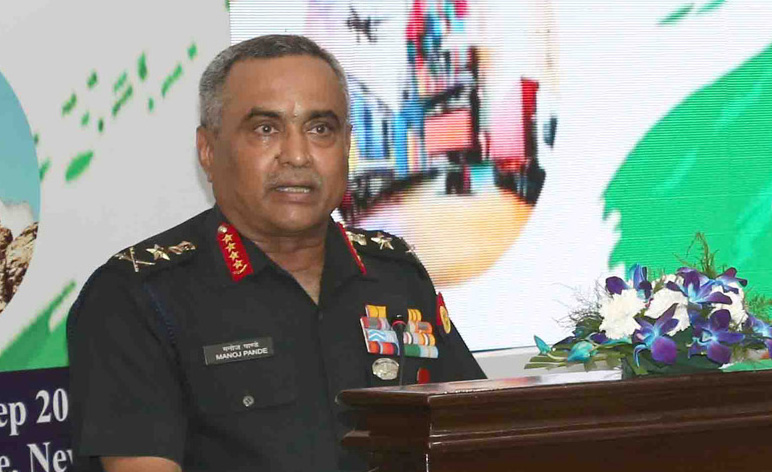 NEW DELHI, Sept 12: Indian Army Chief General Manoj Pande on Monday, September 12, 2022 said the process of Indian and Chinese militaries disengaging from Patrolling Point (PP) 15 in Gogra-Hot Springs area in eastern Ladakh was “going as per schedule”.
The External Affairs Ministry had said on September 9 that the disengagement process will be completed by September 12.
Gen Pande, who has returned to Delhi after a two-day visit to Ladakh, on Monday addressed a seminar on Army logistics at Manekshaw Centre here, and also referred to the eastern Ladakh border standoff that erupted two years ago.
“I will have to go and take stock. But, it (disengagement process) is going as per schedule, and what was decided,” he said on the sidelines of the event, when asked about the status of the process.
Gen. Pande on September 9, 2022 had carried out a comprehensive review of the overall security situation in eastern Ladakh, two days after Indian and Chinese militaries began disengaging from Patrolling Point 15 in the Gogra-Hotsprings area in the region.
The eastern Ladakh border standoff erupted on May 5, 2020, following a violent clash in the Pangong lake areas. Both sides gradually enhanced their deployment by rushing in tens of thousands of soldiers as well as heavy weaponry.
The Ministry’s comment on September 9 had come a day after the Indian and Chinese armies had announced that they have begun to disengage from the Gogra-Hotsprings Patrolling Point 15.
External Affairs Ministry spokesman Arindam Bagchi had said that according to the agreement, “the disengagement process in this area started on September 8 at 8:30 am and will be completed by September 12”. (Agencies)