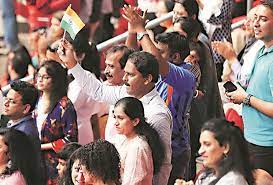 WASHINGTON, Jan 27: The Indian American diaspora has played an important role in strengthening the India-US relationship, the country’s top envoy said here on Wednesday, a day after the Indian government announced Padma Bhushan civilian awards to three eminent Indian Americans.
“The diaspora has been an important pillar of the relationship, which continues to strengthen ties through its achievements in diverse sectors and contribute to India’s development journey,” India’s Ambassador to the US Taranjit Singh Sandhu told the community during a virtual celebration of the country’s 73rd Republic Day.
Addressing thousands of Indian Americans, who joined the celebrations through various social media outlets, Sandhu said this year, three of the distinguished diaspora members have been conferred the Padma Bhushan — Madhu Jaffrey for popularising Indian cuisine, Satya Nadella and Sundar Pichai for their leadership in the technology sector.
“This is a matter of pride for all of us, as well as a testament to the strength of the community,” Sandhu said from the lawns of India House, the official residence of India’s Ambassador to the US, in Washington DC.
In his remarks, the Indian ambassador said the United States has been a key partner for his country.
“As Prime Minister (Narendra) Modi mentioned in his remarks at the Bilateral Summit with President (Joe) Biden last year, we are witnessing a transformative period in the India-US strategic partnership driven by tradition, talent, technology, trade and trusteeship. All of us are working towards realising the full potential of this consequential relationship,” he said.
Observing that this year is special as the county celebrates the 75th anniversary of its independence as Azadi Ka Amrit Mahotsav, Sandhu said India today is better placed to face the increasing challenges and complexities that the world encounters.
“We have a massive vaccination drive against COVID-19 ongoing, administering more than 1.6 billion (160 crore) doses so far and taking vaccines to the remotest corners of the country. The initiatives of the government aimed at boosting jobs, consumer demand, manufacturing, infrastructure, agriculture and exports are accelerating economic recovery,” he added.
“There is greater investor confidence in the resilience of the Indian economy. India has emerged as one of the largest tech startup bases globally, reflecting the entrepreneurial and innovation spirit particularly among its youth. We have also made rapid and substantial strides in the social sector, including in areas such as health, sanitation, affordable housing, rural electrification, women empowerment and financial inclusion,” Sandhu said. (PTI)