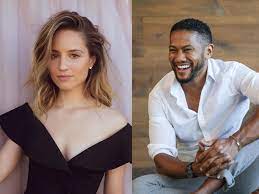 Los Angeles, Jun 24: “Glee” star Dianna Agron and “Black Summer” actor Justin Chu Cary have joined the cast of “As Sick As They Made Us”, the feature directing debut of “The Big Bang Theory” star Mayim Bialik.
Another new addition to the cast is Charlie Weber, known for “How To Get Away With Murder”, reported Deadline.
The trio joins Dustin Hoffman, Candice Bergen, and Bialik’s “Big Bang Theory” co-star Simon Helberg in the comedy-drama.
The story revolves around a new romance of Jay (Cary) with the recently divorced Abigail (Agron), who has just split from her husband (Weber), which arrives right in the midst of her parents’ (Hoffman and Bergen) chaotic antics.
After a lifetime of dysfunctional hilarity, the family, accompanied by an estranged brother (Helberg) find it within themselves to embrace for one final goodbye.
Bialik, who also wrote the screenplay, described working on the film as “the dreamiest trippiest thing” she has experienced in her career.
“Seeing these actors bringing my words to life and seeing their creativity soar is an experience I never imagined could bring so much satisfaction. Being a director means also seeing images which evoke meaning; these actors are elevating every image I imagined exponentially. I come home every night exhausted and spent and simultaneously energised and starving for more,” she said.
Screen Media Ventures, a Chicken Soup for the Soul Entertainment company, has boarded international rights on the project, with Film Mode Entertainment handling sales including domestic at Cannes.
“We are excited for Film Mode Entertainment to launch sales on Mayim Bialik’s all-star, multigenerational dramatic comedy. We have no doubt this film will be highly sought after by our partners,” added Screen Media Ventures President David Fannon.
Shooting on “As Sick As They Made Us” is underway in New Jersey. (PTI)