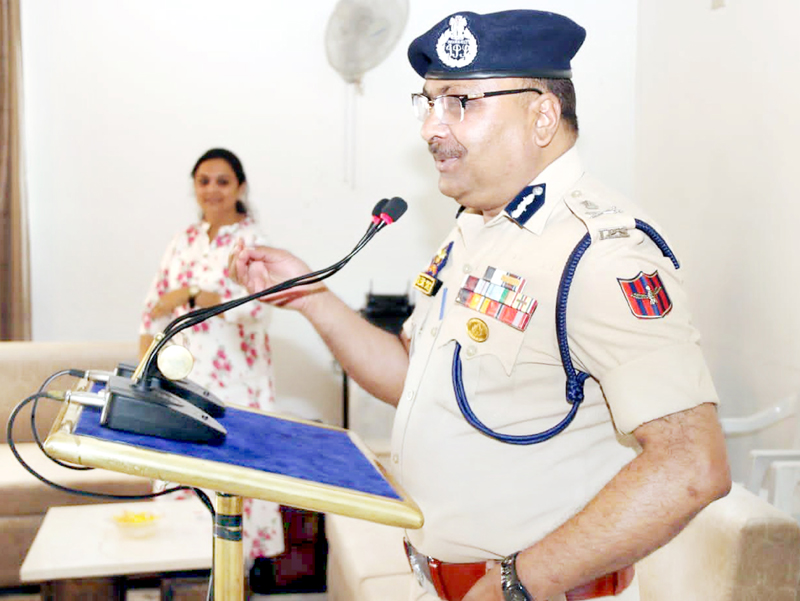 JAMMU, May 24: Director General of Police J&K Dilbag Singh had a formal interaction with a group of students of Udhampur district on their return from Bharat Darshan Tour today at GOs mess, Gulshan Ground, Jammu.
The interaction was attended by ADGP Jammu Mukesh Singh, DIG Resi-Udhampur Range Mohammad Suleiman Choudhary, SSP Udhampur Vinod Kumar and other senior police officers of Jammu district.
On the occasion, students shared their views and learning experience with the senior officers. The students were excited to narrate their travel experiences and the sites visited by them. They said that it was a great opportunity for them as they got to know how beautiful is the diverse culture, languages, architecture and geography of the county.
Welcoming the students, the DGP said that Bharat Darshan Tour for J&K students and youth are aimed at educating them about the beauty of India, as this country is known for its ‘Unity in Diversity’. He said that these tours provide an opportunity to know about the different cultures, foods, dressing styles and climates besides day to day activities etc and added that what is common in human race is that people across the globe think alike and have similar feelings.
He advised them to put their experiences in writing in school magazines, newspapers or in the form of a booklet so that more and more people would get to know about the country through their experiences. He said that organizing these tours is aimed at further strengthening the police youth bond and hoped that these groups would work as Student Police Cadets in future.
The group of 77 students from Udhampur district was on Bharat Darshan tour under JK Police’s civil action programme during which they visited Delhi National Police Memorial, Red Fort, Qutab Minar, Metro train, India Gate, Parliament House, Malls in Delhi and Mahabalipuram, Museum, National Park etc in Chennai. They also got a chance to interact with the dignitaries at Delhi and Chennai.
Students from Budgam also returned today after completing their Bharat Darshan Tour.

SKUAST-J Convocation from June 26 to 28; 1305 passouts to be awarded degrees