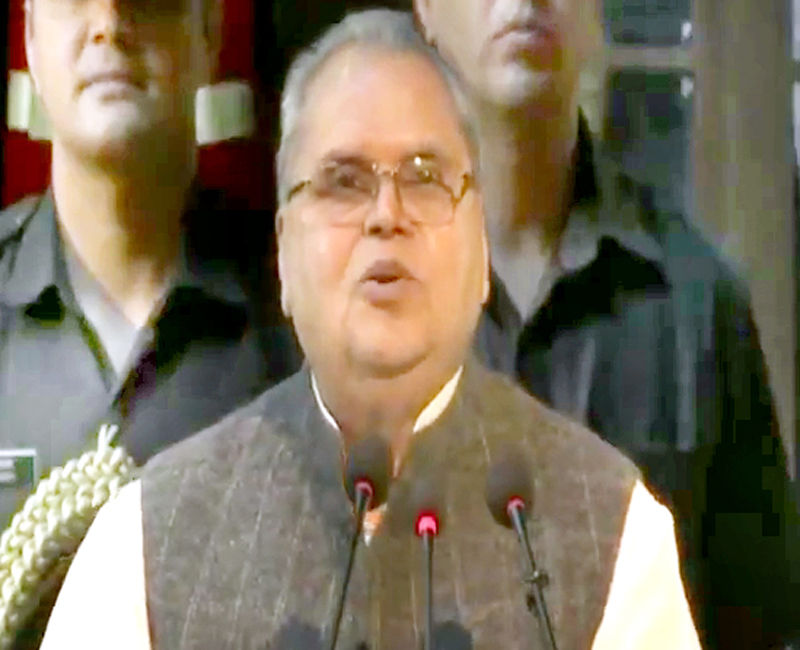 Fayaz Bukhari
Srinagar, Sept 18 : Governor Satya Pal Malik today said that development of the State should prompt a clamour among residents in Pakistan-occupied Kashmir (PoK) to join India.
Addressing a function here, he said for the past two weeks some Ministers have been talking about taking back PoK from Pakistan by force.
“I have been seeing from the past 10 to 15 days that many of our Ministers, who do not get to talk on International matters, have been repeatedly talking about invading PoK, taking back PoK. My belief is that if PoK is next target, we can take it on the basis of development of Jammu and Kashmir”, he said.
“If we can give love and respect to people of Jammu and Kashmir and secure the future of their children, bring development and prosperity, I can guarantee that within a year or so there will be a revolt in PoK and you will get it without a confrontation … the residents of PoK will on their own say that they want to come to this side. This is my roadmap for PoK,” the Governor said.
He urged the people of the country to treat people from Kashmir with love and respect. He said officers have been placed in every State to help the Kashmiri students.”There are 22,000 Kashmiri students studying in different States of the country and they should be treated with love. People of Kashmir should be treated with love and respect,” he added.
He said the Roshni scheme has apparently turned out to be a Rs 25,000 crore scam. “The implementation of the scheme has been such that it has proved to be a Rs 25,000 crore scam … When I came here, the first thing I did was to end the Roshni scheme and we have handed the Roshni cases to Anti Corruption Bureau for investigation,” he said.
Malik said the Government has taken steps to ensure uninterrupted power supply to Jammu and Srinagar cities from this winter.
Malik thanked Union Power Minister R K Singh, who was also present in the function, for his generous support to the power sector in the State. “At my request, he (Singh) has reduced the time for laying of Leh-Nubra transmission line from three years to 18 months,” he added.
The Governor and the Union Minister inaugurated 15 power projects in Kashmir, Jammu and Ladakh and laid the foundation stone for another 20 projects in the three regions of the state that has been bifurcated into two Union Territories on August 5.
Singh, in his address, stressed the power supply in the winter will be much better than in the past.
“We will spend time in Jammu in December and January to experience and observe the situation … our goal is to provide 24 hours electricity supply to all the citizens of the country including J&K and Ladakh,” he said.
Singh said Jammu and Kashmir and Ladakh have the potential to generate hydel power to not only be self-sufficient but also export it to other States.
“This will enhance the per capita income of the State like it did in Himachal Pradesh and Uttarakhand,” he added.