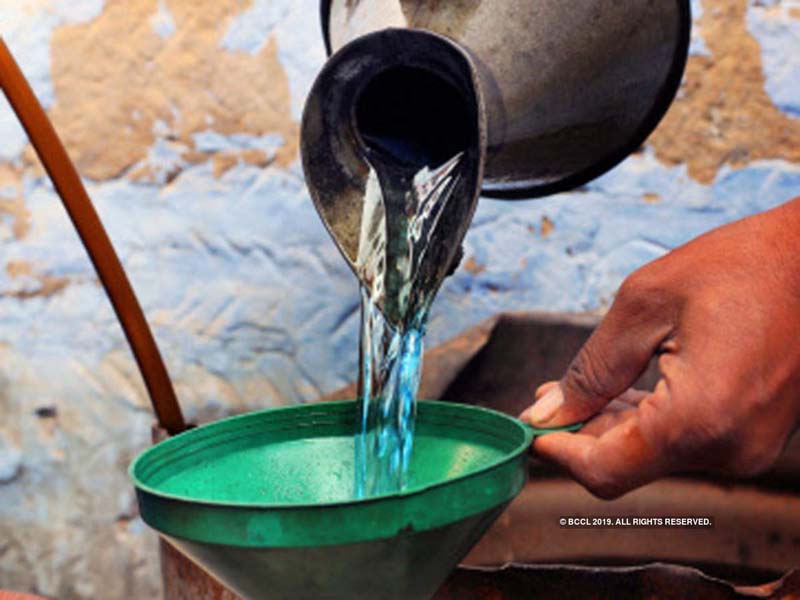 Mohinder Verma
JAMMU, Sept 18: Shocking it may sound but it is a fact that Governor’s Administration has failed to act strongly against the influential Tehsil Supply Officers (TSOs) of the Department of Food, Civil Supplies and Consumer Affairs despite establishment of their involvement in the misappropriation of over 86,000 litres of subsidized kerosene oil. Moreover, these accused officials are treating as trash the notice directing them to deposit Rs 24 lakh in the treasury for causing loss to the State exchequer by playing active role in the scam.
The misappropriation of 86,680 litres of subsidized kerosene oil in Triath area of Kalakote tehsil of Rajouri district came to the fore during the joint surprise check conducted by the Anti-Corruption Bureau (ACB), which accordingly registered FIR No.5/2019 under Jammu and Kashmir Prevention of Corruption Act against Mohammad Ashraf and Pranab Gandotra, the then Tehsil Supply Officers (TSOs) Kalakote and others.
As per the FIR, 263680 litres of kerosene oil had been shown allotted to the dealers of Triath and adjoining areas. However, the dealers had received only 177000 litres of kerosene oil for distribution to the ration card holders of the area as such 86680 litres of kerosene oil was misappropriated by the accused persons by misuse and abuse of their official position for pecuniary gains.
In this way, they not only deprived the genuine beneficiaries of their quota of kerosene oil but also caused loss amounting to Rs 2395401 to the State exchequer.
In the meanwhile, the Department of Food, Civil Supplies and Consumer Affairs decided to initiate departmental enquiry against the accused Tehsil Supply Officers and accordingly vide Government Order No.21-FCS&CA dated February 11, 2019 a committee of officers was constituted to enquire into the alleged misappropriation of huge quantity of kerosene oil allotted to the dealers of Triath area of Kalakote tehsil with effect from January 2015 to March 2017.
The committee was directed to find out the allocation of kerosene oil to Rajouri district by the Directorate of FCS&CA Jammu and its further allocation to tehsils of Rajouri district specifically to Kalakote tehsil; bifurcate the total allocation to Kalakote TSO-wise and dealer-wise quota released by the TSOs etc.
After detailed enquiry, the committee prima-facie established the involvement of TSOs— Mohammad Ashraf and Pranab Gandotra and some dealers in the misappropriation of kerosene oil and accordingly a detailed report in this regard was submitted to the Government.
While licenses of the erring dealers were suspended on the recommendations of the committee of officers, a notice was issued to both the TSOs asking them to deposit Rs 24 lakh in the treasury (the loss caused to the State exchequer), official sources told EXCELSIOR, adding “though one and half month has lapsed since the issuance of show cause notice yet neither the accused officials furnished any written response nor deposited Rs 24 lakh in the treasury”.
“In this way, they are treating the Government notice as trash. Moreover, one of them-Pranab Gandotra is holding the prime post of TSO Rural-II Jammu while as another is attached in the office of Assistant Director Rajouri”, sources said, adding “it is highly unjustifiable that accused TSO has been given an important post instead of being taken to task for misappropriation of kerosene oil worth lakhs of rupees and for openly disrespecting the Government directive for depositing money in the treasury”.
It is pertinent to mention here that accused TSOs are also involved in other illegal acts for which separate FIRs have also been registered against them by the Anti-Corruption Bureau. “What is the fun of conducting departmental enquiries if these are not to be taken to the logical conclusion by initiating strong action against the accused officials”, sources said and asked, “what sort of message the Governor’s administration is giving to the people by acting only against the kerosene oil dealers and ignoring the big shark”.
The committee of officers has also made certain recommendations to the department for streamlining the distribution of subsidized kerosene oil among the eligible consumers, sources said while disclosing that the committee has suggested geo-tagging of the kerosene oil dealers, monthly visits by the Assistant Directors to remote areas to personally assess the distribution of kerosene oil and address the grievances of consumers etc.
“However, these recommendations are yet to be fully implemented by the concerned authorities”, sources said.