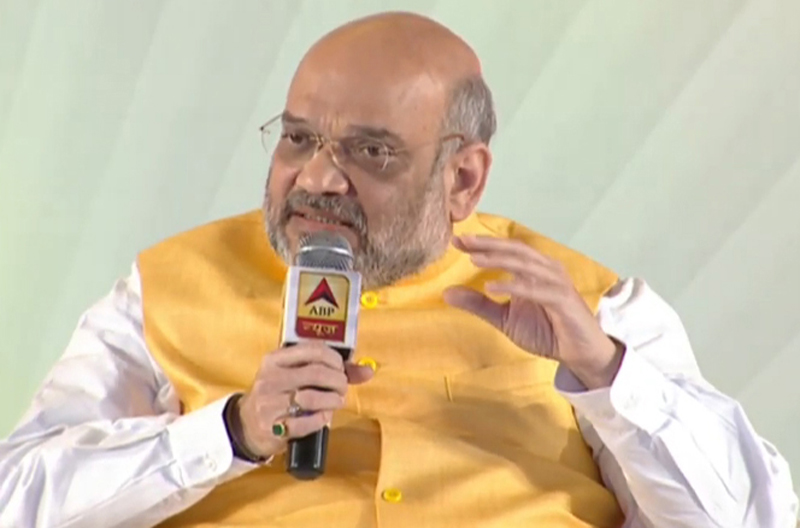 ‘Mobile, Internet launched in J&K 16 yrs after other States’

Sanjeev Pargal
JAMMU, Sept 18: Union Home Minister Amit Shah said today that Rs 2.77 lakh crore sent by the Central Governments to Jammu and Kashmir during last 70 years didn’t reach to the people and were misappropriated as there was rampant corruption in the State which can’t be even imagined.
“There was rampant corruption prevailing in Jammu and Kashmir. There was no transparency in the Government jobs. Such was the situation that there was no Anti-Corruption Bureau in the State to deal with the cases of corruption,” Shah pointed out while addressing conclave of national news channel.

Click here to watch video
He said Rs 2.77 lakh crore sent by the Central Governments to Jammu and Kashmir during past 70 years didn’t reach to the people and were misappropriated.
“Now development will start in Jammu and Kashmir and Ladakh. Process of recruitment has also started. Educational institutions, hotels and industries will come post abrogation of Article 370 which was a hurdle in development of the State and has been removed by Narendra Modi Government,” Shah, who also happens to be the BJP president, said.
The Home Minister didn’t agree with the questioner that Dr Farooq Abdullah (National Conference president and former Chief Minister) has been detained for two years.
“He (Dr Abdullah) has been detained under local Security Act and kept under house arrest,” he said.
Asserting that ban on internet services and mobile phone calling was not a new thing in Kashmir, Shah said mobile telephones and internet services were launched in Jammu and Kashmir 16 to 17 years after they were introduced in the country.
He said out of 196 police stations in Kashmir, restrictions were confined to the areas under jurisdiction of eight police stations only. The restrictions, he added, were in the form of Section 144 only and there was no curfew.
“Ban on internet services or mobile calling facility has nothing to do with human rights violations,” he said, adding, 41,000 people have been killed in Kashmir during three decades long militancy which rendered many women widows and children orphans, which was the human rights violation.
“Who is responsible for these killings? Aren’t they biggest human rights violations?” he asked and blamed the policies pursued by the Congress for this.
The Home Minister said the family rule not only in Jammu and Kashmir but entire country has been rejected during Narendra Modi regime.
He added that for the first time in Jammu and Kashmir, there were 40,000 representatives of the people in the form of Sarpanchs and Panchs. They are more important for the people instead of two families, he said.
Asserting that abrogation of Article 370 of the Constitution of India granting special status to Jammu and Kashmir was always on the BJP agenda, Shah said the BJP was of the view that Article 370 was temporary provision and should be removed and when the party got a chance, it removed the 370.
“There is the BJP Government in place and I’m the Home Minister. This (abrogation of Article 370) was our agenda. Why we shouldn’t implement our agenda?”, he asked.
Replying to a question on nuclear and war threats by Pakistan, the Home Minister said there was no question of war as what India has done was within the Constitution, Rules and ambit of Parliament. The Parliament used its powers (to scrap special provisions of Jammu and Kashmir and bifurcate the State into two Union Territories of J&K and Ladakh). There was no situation of war, he added.
He said entire world was with India on the issue of Kashmir, which was major diplomatic victory of Prime Minister Narendra Modi.
“India has suffered because of cross-border terrorism. Pakistan has major role in promoting the terrorism in India. The world has agreed to this,” he added.
Asserting that development was taking place in Jammu and Kashmir under the President’s rule, Shah said the Centre was committed to equal development of Jammu, Kashmir and Ladakh.
PTI adds: Union Home Minister Amit Shah today said Prime Minister Narendra Modi showed Pakistan its place by abrogating Articles 370 and 35A and established that Jammu and Kashmir is an integral part of India.
Shah also said Congress leader Rahul Gandhi should tell people of Maharashtra, Jharkhand and Haryana, when he goes there, whether he was with the decision to abrogate Article 370.
Assembly elections are due in Jharkhand, Maharashtra and Haryana this year.
Addressing a public meeting after launching the BJP’s ‘Johar Jan Ashirwad Yatra’, the BJP president said his party stood in favour of removing Article 370 ever since it had been there, and asked why the Congress felt a “stomach ache” following its annulment.
“Removing Article 370, Modi ji showed Pakistan its place, and established that Kashmir is an integral part of India,” Shah said.
“Our stand has been to remove Article 370 ever since it had been there,” Shah said and asked “why the Congress felt a ‘stomach ache’ following its abrogation?”.
Making a scathing attack at the Congress, he said the party had also opposed and sought evidence after surgical strike.
“They (Congress) should tell the people which direction they want to go,” he added.