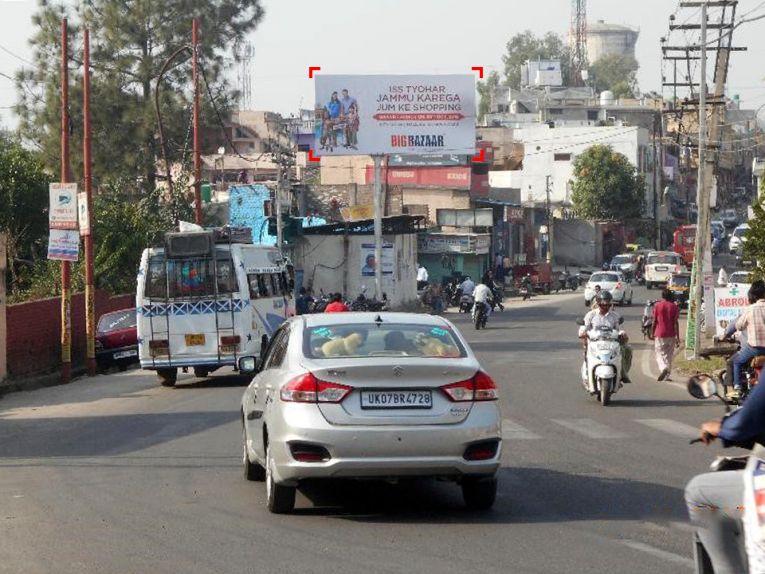 Mohinder Verma
JAMMU, Aug 22: Despite numerous directives from the Division Bench of the State High Court, a high-level committee has failed to take any concrete decision on widening/de-congestion of ever busy Amphalla-Janipur Road to permanently resolve the issue of acute traffic chaos.
The committee was constituted by the Government vide Order No.773-GAD dated July 9, 2019 in pursuance to the order dated June 4, 2019 passed by the Division Bench of the High Court in a Public Interest Litigation (PIL) titled “Citizens Forum and Others Versus State of Jammu and Kashmir and Others”.
The mandate of the committee is to examine the issues related to widening of Amphalla-Janipur Road and decongestion of Janipur-High Court Road and take a final decision on the shifting of utilities on Janipur-High Court link road and payment to the Power Development Department for making such a shifting possible; consider the reports furnished by the RITES to put in place futuristic mobility plan; consider the widening of existing road as suggested in the proposal prepared by the Public Works Department pending execution of the metro project.
The committee headed by Chief Secretary and comprised of Administrative Secretaries of Finance, Housing and Urban Development, Planning, Public Works and Law Departments and Divisional Commissioner Jammu, in its meeting convened in the recent past, held deliberations on the options available to check chaotic traffic scenario on Amphalla-Janipur road in the light of the directions issued by the High Court. However, it failed to take any concrete decision, official sources told EXCELSIOR.
The options of construction of alternate road from Manda wildlife sanctuary and utilizing area under the control of Army were deliberated upon but no unanimous decision could be taken, they said, adding “the committee is of the observation that obtaining clearance to construct road by utilizing the wildlife sanctuary area would be a daunting and time-consuming task”.
Similarly, the members of the committee were of the opinion that Army would not pave the way for utilization of its land in the area adjoining Manda wildlife sanctuary on various justifiable grounds, sources said, adding “after hectic deliberations almost all the members of the committee put weight behind the option of construction of road from the outer portion of the area under the control of Army and connecting it with the High Court-Janipur link road for utilization by civilian population as well as Judges, Lawyers and litigants”.
Accordingly, Roads and Buildings Department was directed to prepare Preliminary Project Report (PPR) by conducting detailed survey of the area and submit the same to the committee as early as possible, sources said, adding “now, whether this option will work depends upon the PPR only”.
“Though the proposal regarding widening of Amphalla-Janipur road, which was mooted several years back, was not shelved by the committee yet it was of the opinion that this option to reduce traffic problem involves compensation worth several hundred crores of rupees as such would not be a viable one”, sources further informed.
Keeping in view the fact that RITES had submitted a proposal regarding construction of metro for Amphalla-Janipur area long time back, the committee found it appropriate not to take any decision in hurry and examine the proposal of RITES in consultation with the Jammu and Kashmir Economic Reconstruction Agency before arriving at any conclusion, sources said.
However, for the widening of Janipur-High Court link road the committee decided to release over Rs 1 crore to the Roads and Buildings Department, sources informed, adding “only 170 meter stretch of this link road is to be widened by shifting the utilities mainly of the Power Development Department and this task can be completed in the shortest possible time”.
In the meanwhile, the committee directed the Traffic Police to strictly check wrong parking of vehicles on Amphalla-Janipur and Janipur-High Court Roads so as to pave the way for smooth movement of the vehicles. Moreover, Jammu Municipal Corporation was directed to take strict action against encroachments so as to ensure utilization of footpaths by the pedestrians.
“Traffic Police has also been directed to re-start the practice of one way movement of passenger vehicles on Janipur-Amphalla and Rehari-Sarwal-Janipur Roads to reduce traffic congestion”, sources further said.