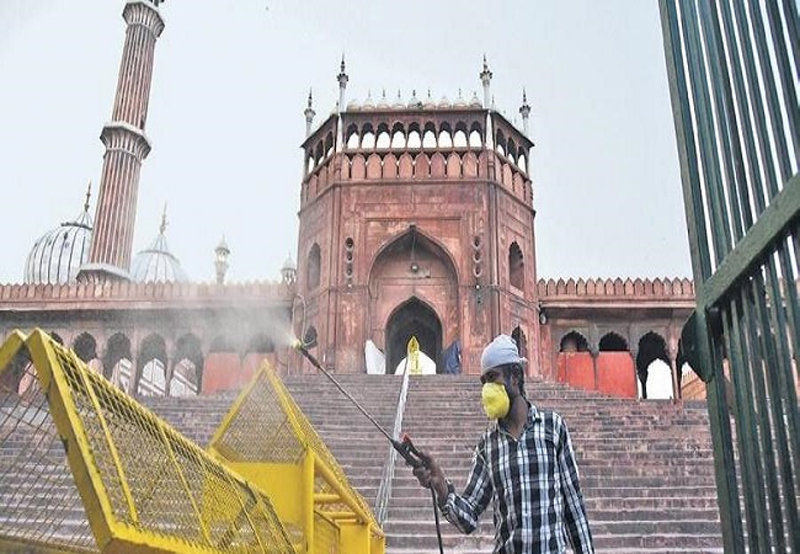 NEW DELHI, Nov 24:
The administration of Delhi’s famed Jama Masjid has put up notices outside the main gates banning the entry of ‘girls’, whether alone or in groups. As controversy escalated, the mosque’s Shahi Imam on Wednesday said the order is not applicable to those coming to offer prayers.
The issue led to an outrage in some quarters as women rights activists termed the mosque’s decision regressive and unacceptable.
The notices, which have no date, came up a few days ago outside the three main entry gates, sources in the administration said. However, it has come to attention only now.
“Jama Masjid mein ladki ya ladkiyon ka akele daakhla mana hai (The entry of a girl, or girls is not permitted in Jama Masjid),” reads the notice by the administration of the 17th century Mughal era monument that attracts thousands of devout as well as tourists.
While Delhi Commission for Women (DCW) chief Swati Maliwal termed it a violation of women’s rights and said she was issuing a notice, sources in the National Commission for Women said it has taken suo motu cognisance of the matter and is deciding on the action to be taken.
Shahi Imam Syed Ahmed Bukhari said the decision was taken after some “incidents” were reported on the premises of the heritage structure.
“Jama Masjid is a place of worship and people are welcome for that. But girls coming alone and waiting for their dates… This is not what this place is meant for. The restriction is on that,” Bukhari told PTI. “Any such place, be it a mosque, temple or gurudwara is a place of worship (ibadat ki jagah hai) and there is no restriction on anyone coming for that purpose. Just today, a group of 20-25 girls visited and they were allowed to enter,” Bukhari added.
In the past, music video shoots by visitors were prohibited. An old board outside the entry gate facing the busy Matia Mahal area bears the message: “Music video shoot is strictly prohibited inside the mosque”. Sources in the Jama Masjid administration claimed that people who engage in “inappropriate behaviour” are being restricted and “not all women”.
DCW chief Swati Maliwal on Twitter said, “It is completely wrong to ban the entry of women in Jama Masjid. The kind of rights a man has to praying, women also have the same rights.”
“I am issuing a notice to imam of Jama Masjid. Nobody has the right to ban entry of women in this way,” she tweeted. In a video, the panel’s chief said that it was a “shameful” and “unconsitutional” act.
“What do they feel? This is not India. This is Iraq? Nobody will raise a voice against discrimination meted out to women openly… Nobody is above the Constitution. For such a Talibanesque act, we have issued a notice to them. We will ensure that this ban is withdrawn,” Maliwal said in the video.
The panel, in its notice, has sought details on the reasons for prohibiting the entry of women and girls “without male companions” in the Jama Masjid and the person responsible for restricting the entry of women and girls.
“If the decision was taken in a meeting, please provide a copy of minutes of the meeting. Steps taken by authorities now for removing the restriction imposed on entry of women and girls,” it said.
The DCW also has sought a detailed action taken report in the matter by November 28.
Women rights activists hit out at the mosque’s administration, saying it takes women centuries back.
Ranjana Kumari, an activist, said this is completely unacceptable. “What kind of 10th century mindset is this. We are a democratic country how can they do this. How can they bar women,” she told PTI.
“This diktat takes us 100 years back. This is not just regressive but shows what kind of mindset these religious groups have about girls. It is extremely unfortunate,” Yogita Bhayana , another women rights activist, said.
The ban on entry of women in religious places had in the past also led to massive outrage triggering debates on equal rights to worship.
In 2018, a five-judge Constitution bench of the Supreme Court had by a majority 4:1 verdict, allowed girls and women of all ages to visit the Ayyappa temple at Sabarimala in Kerala, saying discrimination on physiological grounds was violative of the fundamental rights as enshrined in the Constitution such as the right to equality.
In the following year, when the state government tried to implement the apex court order there was a huge protest against the same and various organisations also moved pleas in the top court seeking a review of its 2018 decision.
Thereafter, in November 2019, a five-judge Constitution bench of the top court by a 3:2 majority verdict had referred the pleas seeking a review of its 2018 judgment to a seven-judge bench, along with other contentious issues of alleged discrimination against Muslim and Parsi women.
The Sabarimala temple had restricted the entry of women belonging to the age group of 10-50 as part of its age-old tradition. (PTI)