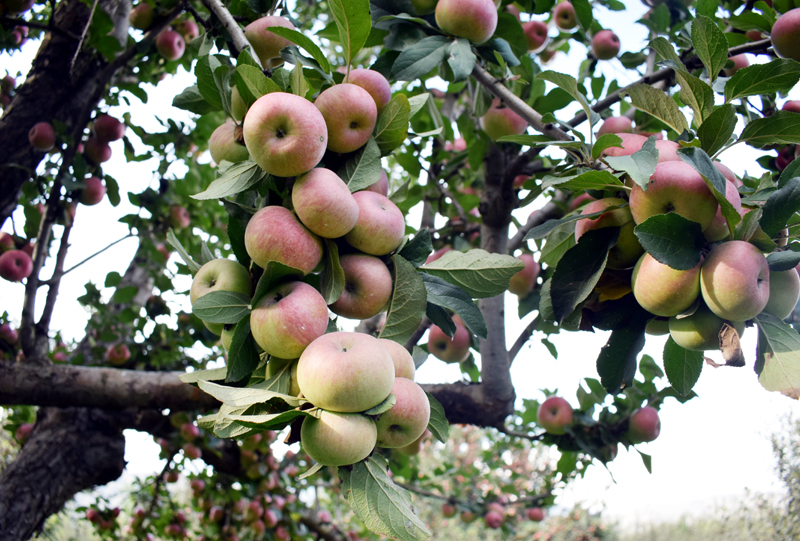 Suhail Bhat
Srinagar, Nov 12: Thousands of apple boxes that were stored in Shopian fruit market in South Kashmir have suffered huge damages in the recent snowfall with growers holding delay in procurement of apples by Government responsible for the loss.
The growers had put up the boxes in the market for sale under Government’s Market Intervention Scheme. However, they alleged that the delay in the procurement of the apples led to their accumulation in the market and increased their vulnerability.
“I brought apples boxes to the market 10 days ago, but I am yet to sell them. Snow has damaged packing of around 100 boxes. The apple boxes that were in the periphery of the tin shed have suffered damages. I have to repeat the packaging process. The repacking means the entire sorting process has to be repeated,” an apple grower said.
The growers claimed that the snowfall has damaged the packing of around 10,000 apple boxes while the Department of Horticulture put the figures at around 2000-2500. “The boxes that have suffered damages are unregistered and we have not received them. The growers have forcibly dumped the boxes here,” Anayat Husaain, Area Marketing Officer of Horticulture Department told Excelsior.
He said that there are around 2000-2500 registered boxes which have suffered damages and they would repack them.
Asked about the delay in the procurement, he said: “The procurement was stopped to dispatch the pending boxes.”
As per the figures of Horticulture Department, out of total 1,62,682 boxes received in the market, 83,306 boxes have been dispatched till 6th November. Nearly 100 trucks have been utilized for this process.
An official at the department said the authorities received unexpected quantity of apple boxes which caught them on wrong foot. To worsen things for the growers the process of grading is stalled from last week as Government failed to arrange transport facilities resulting in the accumulation of apples boxes. “Around 30,000 boxes are still lying in the market which are yet to undergo grading and some have not been lifted,” hesaid.
He added the authorities have reduced the staff and only 8-9 people are doing the job of grading. “The Horticulture Department carried speedy grading of apples in the first month and then called majority of its staff back. The staff has been further reduced in the last one week by the department,” he said.
He said that Government is not clearing the outstanding liability. “There is a liability of around Rs 12 crores with the Government. Until 20th October, Rs 1.90 lakhs were released in favour of growers and rest is pending. It is also bothering the growers,” he said.
Denying the claims, Hussain told Excelsior that they stopped grading after the snowfall as more staff was required for the damage assessment. “The workforce has not been reduced. The Director horticulture had to prepare the damage report and needed additional staff. They will report back soon. We have a total of 30 people and another 16 are coming tomorrow,” he said, adding that nearly 40, 000 boxes are yet to be dispatched.