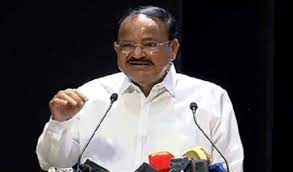 New Delhi, Sep 23 :  Former Vice President M Venkaiah Naidu on Friday said the Direct Benefit Trasfer (DBT) is the biggest achievement of the Narendra Modiled government at the Centre as it freed people from the shackles of ‘middlemen’, ensuring endpoint delivery of welfare measures. The former VP made the statement after he unveiled the book “Sabka Saath Sabka Vikas Sabka Vishwas”, a collection of selected speeches of Prime Minister Narendra Modi, along with Kerala Governor Arif Mohammed Khan and Union Minister for Information and Broadcasting Anurag Thakur at a function here, as he mentioned about opening crores of bank accounts under the able leadership of Modi. “Previously schemes were identified either as Government or political, Modi understood that realisation of a goal depended hugely on the involvement of people. Swachha Bharat Abhiyan was thus envisioned by the PM as a Jan Andolan (people’s movement),” Naidu said lauding the PM. He further said, “For long people have said that India does not speak from a position of strength and stature. With the advent of PM Modi, India is now a force to reckon with and India’s voice is heard by all.” With his gift of enormous communication skills, Modi can connect with all the people of the country alike, Naidu added. Talking about the book, the VP said, “This book is a significant contribution to widen the understanding of the challenges being faced by the nation and the concerted efforts being made to overcome them.” The book is a compilation of 86 speeches of the PM from May 2019 to May 2020 (Agencies)