Iqbal Ahmad
The historic city of Jammu is very much known as the City of Temples. Indeed this title to this city has been given in view of its rich temple heritage legacy.
Jammu is a real museum of its magnificent temple architecture, but if we take a look of its entire province we can say that it is not only the museum of temples, but of its glorious forts and places as well. Jammu showcases the exquisite architectural collection of its wonderful forts, places and temples.
In fact this land is the land of glorious monuments, but very few people know that it has also been called Dar-al aman abode of peace, a title given to it by Mughal emperors of India. Since Mughal emperors had been very fond of Kashmir and they had sung lyrics in the praise of this beautiful vale and titled it as paradise on earth but they had loved Jammu as well and beautified it with their glorious monuments. They called it Dar-al aman or abode of peace. The numismatic researches conducted of the Jammu and Kashmir’s ancient coins have revealed that many of the ancient coins minted from Jammu have carried legends in Persian and bore the legend Dar-al aman in Persian letters which means the abode of peace. 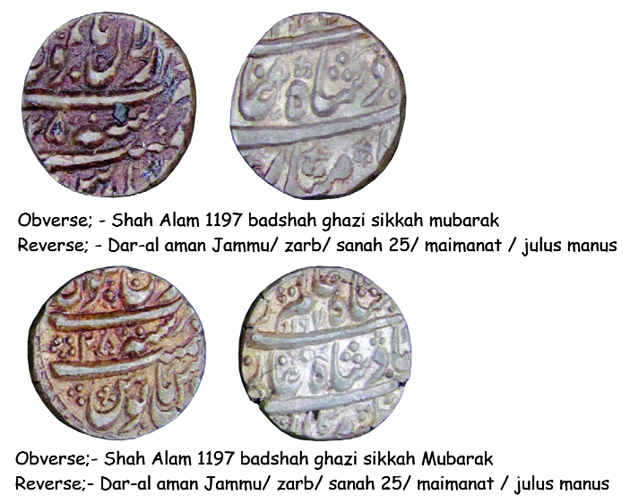 The numismatists have found several such Mughals coins of Shah Alam II, of the Jammu mint, which have been given mint as Dar-al Aman Jammu. These are mostly silver coins called in numismatic terminology as the Mughal rupee and have also been found beyond the borders of Jammu province.
Shah Alam II the Mughal emperor is known to had struck his coins from Jammu mint and has named Jammu on his coins as “Dar-al aman,’ the abode of peace and tranquility Such coins are believed were struck in the name of Shah Alam almost in the every mint to the north of the Sutlej.
Although the numismatic history of later Mughals is a bit confusing as the attribution and interpretation of most of coins of later Mughals is difficult but in case of the Jammu mint it is very clear. Jammu is believed to be the last seat to the north of the river Sutlej which has remained loyal to the mughal emperors of Delhi throne. Shah Alam who ruled in the 2nd half of the 18th century AD is seen on many coins from Jammu mint. On the obverse of such coin the legend reads in Persian nastaliq Shah Alamm Badshah Gazi with date in Hijra era as 1197 and sikka mubark, while on the reverse side of the coins mint name as Dar-al aman Jammu/ zarb/ sanah 25/ maimanat / julus manus.
In fact Jammu has got its long and interesting history. Many historians and locals believe that Jammu was founded by Raja Jambu Lochan in the 14th century BC. A curious legend recorded in its ancient records states that during one of his hunting campaigns, the Raja reached the Tawi River where he saw a goat and a lion drinking water at the same place. After quenching their thirst, the animals went their own ways. The Raja was amazed, abandoned the idea of hunting and returned to his companions. Recounting what he had seen, he exclaimed that this place, where a lion and a lamb could drink water side by side, was a place of peace and tranquility. The Raja commanded that a palace be built at this place and a city was founded around it. This city became known as Jambu-Nagar, which then later changed into Jammu. Jambu Lochan was the brother of Raja Bahu Lochan who constructed a fort on the bank of river Tawi.
It looks Mughal Emperor Shah Alam has not only been very much familiar about this ancient curious legend related about this place, but has also found Jammu a peaceful land and so has inscribed this title of peace and tranquility of this city on his coins. It was after centuries together that the original title of this land was revived by this Mughal emperor in the Persian form which during the mughal rule was their official language.
In fact Jammu has almost remained more or less peaceful throughout its historical career and so has been displaying it’s this legacy in today’s world of unrest.