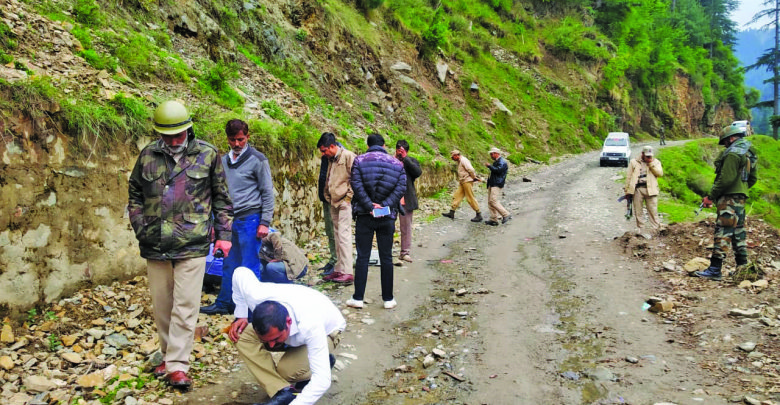 Excelsior Correspondent
JAMMU, May 18: An indefinite curfew continued in Bhaderwah town of Doda district for third consecutive day today, where Army and CRPF besides local police remained deployed in strength in all vulnerable areas to maintain law and order even as police constituted Special Investigating Team (SIT) for investigations into the mysterious killing of 52-year year old Nayeem Shah at Nalthi in the wee hours of Thursday.
“No relaxation was given in curfew for third day today though no untoward incident was reported from any part of curfew bound areas. Situation remained peaceful but still it was tense. We are not taking any chances and, therefore, continued with curfew restrictions,” SSP Doda Shabir Ahmed Malik told the Excelsior.

Click here to watch video
He said Army and CRPF remained deployed in the town and they conducted patrolling of sensitive areas along with police to restore confidence among the people. There was no report of curfew being defied in any of the areas, he added.
Malik said out of eight persons detained by police on the day of killing, none of them has so far turned out to be the murder accused. However, their questioning continued and police parties were investigating to find out reasons behind the killings and identity of the accused to nab them.
Mobile Internet services remained suspended in Bhaderwah town and surroundings for third day today.
Meanwhile, a complete bandh was observed by the majority community today in Kishtwar and Doda in protest against the killing of Nayeem Shah and injuries to Yasir Khan in firing at Nalthi on early Thursday morning.
Shops and business establishments owned by the majority community remained closed in Kishtwar and Doda towns. Traffic movement was also negligible.
People demanded immediate identification and arrest of the accused followed by stern action against them.
Meanwhile, a five-member SIT was today constituted to probe the killing.
“A five-member SIT headed by Superintendent of Police, Bhaderwah, Raj Singh Gouria has been constituted to probe the killing of Shah,” SSP Doda, Shabir Ahmad Malik said.
Gouria, along with other members of the SIT, and a team of Forensic Science Laboratory (FSL) visited the scene of the incident at Kachi Nalthi village and collected fresh evidence.
The SIT visited the scene of crime to collect evidence and record eyewitness account. The SIT members were at the scene for over four hours for investigations. Yesterday, police had recreated the scene of crime at the spot to verify direction from where 12 bore muzzle loaded rifle shots had been fired by unknown persons in which Nayeem Shah was killed and Yasir Khan was injured. Both of them were residents of QIla Mohalla and were returning from Sarthal.
Meanwhile, Deputy Commissioner, Doda, Sagar Doifode said a number of non-locals were found involved in stone-pelting following the incident and three of them were arrested so far.
“All those involved in violent protests are being identified. More arrests are expected in the coming days,” he said, adding that police have been directed to collect details of non-locals including students, labourers, servants and businessmen who are living as tenants to keep a watch on their activities.
Doifode said the curfew continued in the town as a precautionary measure although the situation remained by and large peaceful and there was no report of any untoward incident from anywhere.
“The situation is well under-control. We are reviewing the situation and will decide whether to relax curfew tomorrow or not,” he said.
The Army along with the Central Reserve Police Force (CRPF) and police are deployed in strength in the town especially in the sensitive localities to maintain law and order, officials said.