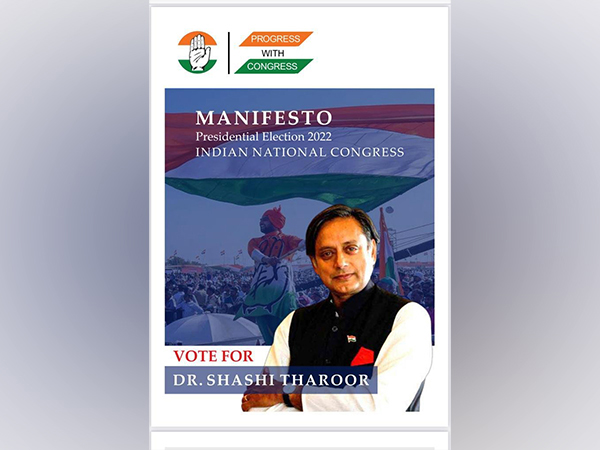 New Delhi, September 30: Congress presidential candidate Shashi Tharoor has landed in a controversy on Friday as the manifesto shared by him for the election shows a “distorted map of India” in which he has omitted parts of Jammu and Kashmir, and Ladakh.
He shared the distorted map of India, where he talked about ‘decentralization of the organization’.
The goof-up by Tharoor, who is running for the president’s post of the country’s oldest party does not show good precedent.
Later Tharoor rectified the blunder by replacing it with the correct map of India in his election manifesto.
This is not the first time the Lok Sabha MP has shared a distorted map of India. Earlier in 2019, Tharoor shared a ‘distorted’ map of India on Twitter. The northernmost territory of the country was missing from the map shared by the Congress leader.
In December 2019, he shared the cover of a booklet about the Kerala Congress’s protest against the Citizenship Amendment Act (CAA). He later deleted the tweet and rectified his mistake.
Tharoor has issued a manifesto explaining how he intends to rejuvenate the party through decentralisation and internal reorganisation if he wins the election.
“Every party needs leadership, but at all levels and not just at the top. The Congress must empower the party in the states by giving real authority to the PCC Presidents, decentralize authority and truly empower the grassroots office-bearers of the party. We must provide a credible alternative to the BJP ‘s centralization of authority in its party affairs and in the affairs of governance. Re-imagining the organization, delegating powers to state, district and block leaders and empowering grassroots workers will not only free the new leader from the onerous burdens of over-administration, but help create the strong state leadership that in past eras strengthened the Congress’ national appeal,” the Congress leader’s manifesto reads.
He also promised to increase focus on youth and to give a bigger role to women in the party
“The Congress will support leadership by women, for women, in keeping with the “Ladki boon, lad sakti hoon” principle. Women will be encouraged to take up issues that actually matter to women in our society. More positions for women should be reserved in PCCs and in the electoral fray. The party will work to pass the Women’s Reservation Bill. In these efforts, the role and capacity of All India Mahila Congress will be strengthened,” the manifesto reads.
Tharoor filed his nomination at the All India Congress Committee (AICC) office in the national capital. Before that, he visited the Raj Ghat to pay homage to Mahatma Gandhi.
“There is a need for decentralisation in this party. We are not an election machine for winning elections every five years. We must serve the people of India,” Tharoor said.
He said the manifesto explains “how we hope to rejuvenate the party, to decentralize the organisation of the party”.
“In my own efforts, I am guided by the crores of party workers who have taken the party through good times and bad and who are once again hoping for a renewed, dynamism and energy in the Congress party,” he said addressing a press conference.
“This is what I hope to bring to and through my campaign. I have a vision for Congress, for the internal reorganisation of the congress, which I will send to every delegate. We are pleased that we have the signatures of party colleagues from Kashmir to Kerala and Punjab to Nagaland. I am here to be the voice of all the party workers,” Tharoor added.
The senior Congress leader also hit out at the BJP government at the Centre, saying things are “not really functioning properly” in the country.
“We have seen that things are not really functioning properly in our country: demonetisation, historical unemployment, inflation. Congress should be the party to bring change,” he said.
Tharoor will primarily take on another veteran leader of the Congress, Mallikarjun Kharge, for the party president post. Jharkhand Congress leader KN Tripathi, too, has filed his nomination.
Earlier, Digvijaya Singh and Ashok Gehlot said that they have dropped out of the race.
The former Madhya Pradesh chief minister visited Kharge at his residence this morning. “I told him that I stand by him and can’t even think of contesting against him, I will be his proposer,” Singh told reporters.
Nominations for the post of Congress president closed at 3 pm today and results will be declared on October 19. (Agencies)