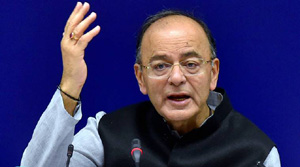 NEW DELHI, Aug 29: Finance Minister Arun Jaitley today accused Congress and its leader Rahul Gandhi of “peddling untruth” and carrying out a “false campaign” on the Rafale deal as he sought to counter the opposition’s charge of it being the “biggest scam” in the defence sector.
Replying to Congress’s posers with his own set of 15 questions for Gandhi, Jaitley said the deal NDA Government had entered into with France on April 10, 2015 for purchase of 36 Rafale fighter jets was on better terms than the one agreed to in 2007 under the UPA regime.
French manufacturer Dassault had offered to supply 126 medium multi-role combat aircraft in 2007.
Jaitley sought to bring out the Bofors ghost as well asking Congress if delays in decision making during its regime were based on collateral considerations like the ones witnessed in the purchase of Bofors guns.
Refusing to disclose details of the deal such as the price of the aircraft, due to constraints placed by “secrecy clause” in the contract, he said Congress’s allegations that NDA Government agreed to pay a higher price and is favouring a private industrialist are “complete falsehood.”
In a Facebook post, he then went on to pose 15 questions that included one about the decision-making paralysis under the UPA regime that led to delay of over one decade in ordering the aircraft, which compromised national security.
“Can Rahul Gandhi and the Congress deny that the Indian government has no contract whatsoever with any private industry in relation with the Rafale aircraft supplies? In fact, 36 of the Rafale aircraft with their Indian adaptations are going to be sent to India and there is no manufacturing of these aircraft in India,” he said.
Congress has repeatedly alleged a “scam” in the purchase of Rafale fighter jets claiming the cost per aircraft in 2012 was agreed at Rs 526.10 crore while the one signed under Prime Minister Narendra Modi costs Euro 7.5 billion (Rs 1,670.70 crore per aircraft).
Congress leader and Rajya Sabha MP Partap Singh Bajwa had on Sunday called the deal as the “biggest scam in country’s defence sector post independence.”
Stating that the Rafale controversy was based on “complete falsehood”, Jaitley said it was expected from national political parties and their responsible leaders to keep themselves informed of the basic facts before they enter a public discourse on defence transactions.
“I am asking these questions as his misadventure is impairing national interest and I hope Rahul Gandhi and the Congress party would respond immediately,” he wrote. “Congress party’s false campaign launched on Rafale aircraft deal based on peddled untruth has been casting a cloud on the Inter-Governmental agreement and seriously compromising national security,” he said.
Jaitley said Congress and Gandhi were guilty on three counts – delaying the deal by over a decade compromising national security, speaking of falsehood on pricing and procedure, and further delaying the defence procurement by raising these issues.
“Needless to say that I am constrained by the secrecy clause which exists in the contract and whatever I ask or respond to would be constrained by that limitation,” he said. (PTI)