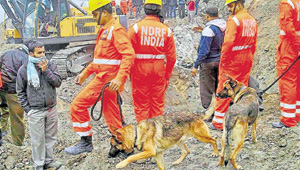 NEW DELHI, Aug 29: The Government on Wednesday gave approval for raising of four additional battalions of National Disaster Response Force (NDRF) to strengthen the India’s disaster response set up at an estimated cost of Rs 637 crore.
The decision was taken in the meeting of Union cabinet held here under chairmanship of Prime Minister Narendra Modi.
The objective of raising additional battalions is to reduce the response time keeping in view the vast geographic area of the country.
These four battalions will initially be raised as two battalions in Indo-Tibetan Border Police (ITBP) and one battalion each in Border Security Force (BSF) and Assam Rifles (ARs).
Later, these four battalions will be converted into NDRF battalions. Based on the vulnerability profile, these four battalions will be placed in Jammu and Kashmir, Himachal Pradesh, Uttarakhand and Delhi National Capital Region.
NDRF is a specialised force, which has been created in the year 2006 for the purpose of specialist response during the natural and man-made disaster or threatening situation. At present there are 12 battalions in NDRF which are deployed strategically across the country to provide immediate response to affected areas due to natural calamities or disaster. (UNI)