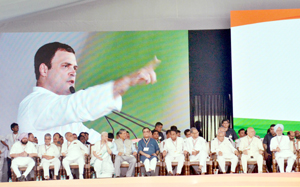 NEW DELHI, Apr 29: Virtually sounding the poll bugle for the next general elections, Congress President Rahul Gandhi today said his party will win all polls starting with Karnataka and come to power at the Centre in 2019.
At his party’s well-attended ‘Jan Aakrosh Rally’ at Ramlila Maidan here, an aggressive Gandhi accused the BJP and the RSS of sowing seeds of hatred and polarising the country.
He also charged Prime Minister Narendra Modi with spreading “lies” against the Congress and its leaders.
While former prime minister Manmohan Singh said democracy “is in danger” in the country with the Modi Government consistently undermining constitutional institutions, Sonia Gandhi alleged that corruption has taken “deeper roots” since it came to power.
Rahul Gandhi said, “Elections are around the corner. In 2014, the BJP and the RSS machine spread lies against our government….
“I can tell you here that the Congress party will win Karnataka, Rajasthan, Madhya Pradesh and Chhattisgarh and the 2019 Lok Sabha elections.”
At his first rally here after taking over as the party chief, Rahul Gandhi said the Congress was like the water required to build the country’s edifice and described party workers as “sher ke bachche” (lions cubs), who sacrificed their lives for truth and not for “satta” (power).
He was making a reference to “killings” of Congress workers in Punjab, Assam and other states.
Gandhi’s remarks about the party’s future performance come at a time when regional leaders such as TRS’s Chandrasekhar Rao were making attempts at forging a non-Congress, non-BJP front for the next  general elections.
Launching an all-out attack on the government, Manmohan Singh said it was time the government gave an account of its works to the people.
“The manner in which the Modi government is functioning, it can also pose a threat to democracy in the country. If Parliament does not function, it can pose danger to democracy,” he said.
“Today an atmosphere is being created where constitutional institutions are being insulted….The way the notice for a no-confidence motion by the opposition was not allowed to be taken up…Are examples  which suggest that democracy was under threat,” Singh said.
Congress Parliamentary Party leader Sonia Gandhi also launched a scathing attack on the government alleging it has left no stone unturned in undermining institutions and targeting political rivals by misusing central agencies.
Both Rahul and Sonia Gandhi made a reference to the “serious crisis” that had gripped the top judiciary, saying it had never happened before.
Rahul Gandhi said while the country believed in a religion that was based on truth in everything, one did “not find truth” in Modi’s speeches.    In his over half-an-hour address, he targeted the prime minister on the law and order front, besides alleging “double standards” on corruption, “messing up” of the economy and “failure” to provide safety to women.
The Congress chief also charged Modi with “silence” on farmers’ distress and took a swipe at him over “rising unemployment” in the country.
The prime minister had promised to give two crore jobs per year and the people trusted him, but after four years of his government, there is widespread unemployment, he said.
Modi has given demonetisation and ‘Gabbar Singh Tax’ (GST) to the people which have broken the back of the informal sector, he said.
Hitting out at Modi for “takeover” of institutions by the RSS, Gandhi alleged that the Sangh was slowly “destroying” them from within, while “Modi ji watches silently”.
The Congress chief also criticised the prime minister for his “silence” on crimes against women and alleged that while Modi gave the slogan ‘Beti Bachao Beti Padhao’, members of his own party allegedly assaulted women.
He said Modi went to China “without an agenda” and alleged that while the neighbouring country deployed its military in Dokalam, he held a “no-agenda” meeting with President Xi Jinping.
“Modi ji did not publicly speak a single word on Dokalam during his visit to China. What kind of prime minister is he,” Gandhi asked.
Gandhi also sought to compare the performance of the state Governments led by his party with that of the Modi dispensation.
He alleged that farmers were under stress, but their loans were not written off by the government, which “waived” the debts of corporate houses.
Congress workers raised slogans at the rally, saying that a change was in the offing. (PTI)