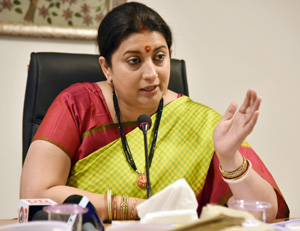 AMETHI(UP), Apr 9: Union minister Smriti Irani Tuesday attacked the Congress, alleging that the party can ally with anybody for the sake of power.
Irani, who is the BJP’s candidate for the Amethi Lok Sabha constituency in Uttar Pradesh, is making a second attempt to wrest the seat from Congress president Rahul Gandhi.
In the 2014 polls, Gandhi had defeated Irani by a margin of one lakh votes. This time, besides his stronghold of Amethi in Uttar Pradesh, the Congress chief is fighting the Lok Sabha elections from Wayanad, in Kerala.
“The Congress can hold anyone’s hand for power. In Jammu and Kashmir, it joined those who talked of separating Kashmir from India,” Irani said addressing a gathering here.
“Whatever the Congress does, we will not give an inch of land of our country to anyone. This election is very crucial, it is not a normal battle. It is a fight for our children and freedom of Amethi,” she said.
Irani alleged that Gandhi’s first choice was Wayanad and not Amethi. The people of Amethi have decided to bid “goodbye to the missing MP (Gandhi)”, she claimed.
On Robert Vadra expected to accompany his brother-in-law Rahul Gandhi for filing of his nomination papers from Amethi on Wednesday, the Union minister said, “People of Amethi should save their land from ‘damadji’ (Robert).”
Robert Vadra is the husband of Congress general secretary for UP East, Priyanka Gandhi Vadra. (PTI)