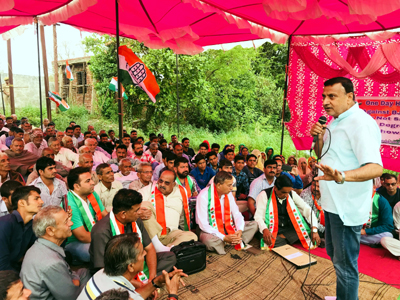 Excelsior Correspondent
JAMMU, Apr 20: Up in arms against ignoring Chowki Choura Block for establishment of new Government Degree College, locals under the banner of Block Congress Committee Chowki Choura, today held a one day hunger strike in front of SDM office, here today.
Shouting slogans against the BJP- PDP Government, the protesting people were demanding  sanctioning of Degree College in this remotely located area. The hunger strike was led Sr vice president J&K PCC and former Minister,  Sham Lal Sharma.
Speaking on the  occasion,  Sham Sharma said that after the introduction of the Right to Education Act,  Government is bound to provide quality education to the students  and extend  regular support for higher education in  far flung area of Chowki Choura ,which mostly comprises of lower economic class families.
“Due to no Government Degree College in the area, a number of students, particularly girls are forced to discontinue their studies after class 10th & 12th,” he said and warned that if the Government does not concede this genuine demand of the people, they would have no option other than to launch an agitation in this regard.
He further said that the BJP though making tall claims for improving the education standard in the State, but the Govt has closed down various schools in the Jammu and has utterly failed in providing the educational infrastructure in the educational institutions.
Taking a dig on BJP,  Sham Lal said that the saffron party  has trampled peoples’ trust and their mandate, as it has proved that other than satiating personal aspirations and ambitions of a chosen few, it can’t deliver, which is why Jammu is feeling politically and emotionally let down.
Sham Lal Sharma lambasted DyCM  Nirmal Singh over his remarks on Congress party which he made in a press conference. “On one hand they (BJP) depute their ministers to show solidarity to Hindu Ekta Manch and subsequently sack two ministers to please their ‘Akhas’ i.e their coalition partner PDP,” he said adding that   the BJP is known for political polarization and Congress does not need to take lessons on nationalism from others.
In the end, the protesters submitted a memorandum addressed to  Chief Minister through SDM Chowki  Choura demanding Govt Degree College  in  Chowki Choura.