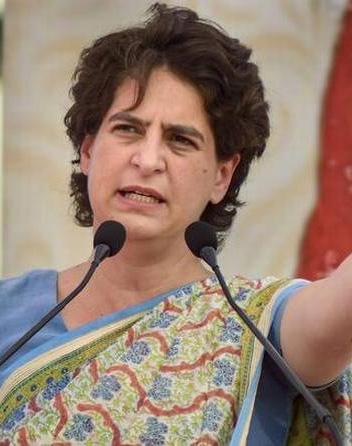 LUCKNOW, Aug 28:
Congress leader Priyanka Gandhi Vadra on Wednesday said the alleged harassment of a woman student by ex-Union Minister and BJP leader Swami Chinmayanand in Shahjahanpur appears to be a repetition of the Unnao case.
In a tweet, she alleged that in Uttar Pradesh, if a woman registers a complaint against a BJP leader her security is not guaranteed.
Gandhi was referring to the rape charge made by a 19-year-old woman from Unnao against MLA Kuldeep Singh Sengar, who was expelled from the BJP recently. In Shahjahanpur, Chinma-yanand was booked on Tuesday under IPC sections related to abduction in order to murder, and criminal intimidation.
Chief Minister Yogi Adityanath’s media advisor Mrityunjay Kumar was quick in his retort advising the Congress general secretary not to create confusion and the police have taken all the steps in this regard.
The Shahjahanpur police on Tuesday lodged an FIR against Chinmayanand after the student went missing following her allegation in a video clip that he had been harassing her.
Her father had filed a complaint with the police accusing Chinmayanand of sexually harassing her, a charge refuted by the BJP leader’s lawyer who claimed it was a “conspiracy” to blackmail him.
The woman’s father alleged that she has gone missing at the behest of the 72-year-old BJP leader, who heads Mumukshu ashram. She is a post-graduate student in one of the colleges run by the ashram.
“In Uttar Pradesh, this matter appears to be repetition of the Unnao case. If a woman complains against a BJP leader, then she is not guaranteed justice, even her own safety is not guaranteed,” Priyanka Gandhi said in a tweet in Hindi with hashtag ‘EnoughIsEnough’.
The 19-year-old rape survivor from Unnao and her lawyer suffered critical injuries in a car-truck collision in Rae Bareli district in Uttar Pradesh on July 28. Her two aunts died in the incident. The girl’s family alleged that the accident was an attempt to eliminate her.
In another tweet, Gandhi said, “Not a single day passes in Uttar Pradesh when the BJP government manages to assure women that you are safe and you will get justice if anything happens with you.”
She also tagged new reports of the case involving Swami Chinmayanand in support of her tweets. “Last year, the BJP government had withdrawn a rape case against accused (Chinma-yanand). It’s clear where the Government is standing. UP girls are watching,” Gandhi said in the microblogging site.
“The girl, who raised voice is missing or deliberately being taken away. What is happening with her nobody knows. Till when this will continue?” she posed in another tweet.
Reacting on Priyanka Gandhi’s comments, Mrityu-njay Kumar took to the same platform to say, “Dont create confusion Priyankaji. UP police has taken all steps.”(PTI)