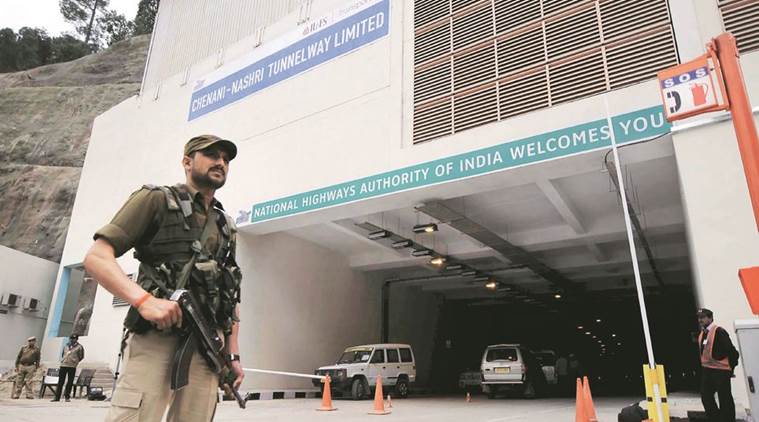 Excelsior Correspondent
JAMMU, Aug 26: In a fitting tribute to Jan Sangh ideologue Shyama Prasad Mukherjee, who had sacrificed his life for ‘Ek Vidhaan, Ek Pradhan, Ek Nishaan’ (One Constitution, One Head and One Symbol) in Jammu and Kashmir in 1953, the Central Government has decided to rename about 10 kilometers long Chenani-Nashri on the name of Mukherjee.
“On the initiative taken by Union Minister of State in Prime Minister’s Office (PMO), Dr Jitendra Singh, Union Minister for Surface Transport and National Highways, Nitin Gadkari has approved the proposal to name state-of-the-art Chenani-Nashri Tunnel on Jammu-Srinagar National Highway as ‘Shyama Prasad Mukherjee Tunnel,” official sources told the Excelsior.
This will be second fitting tribute to Mukherjee after removal of State flag from the Civil Secretariat and other Government offices and cars yesterday after abolition of special Constitutional provisions of Jammu and Kashmir for which Mukherjee had entered the State in 1953 and had died under mysterious circumstances.
Sources said Gadkari has approved the proposal mooted by Dr Jitendra Singh for naming of Chenani-Nashri tunnel on the name of Mukherjee and a formal order in this regard was expected to be issued shortly.
“A similar proposal had been mooted by Dr Jitendra Singh when the tunnel was scheduled to be inaugurated by Prime Minister Narendra Modi on April 2, 2017 during Modi 1.0 Government. However, the proposal was objected by then Chief Minister and People’s Democratic Party (PDP) president Mehbooba Mufti on the ground that it would generate controversy,” sources recalled.
With Jammu and Kashmir now directly under the Central Rule, Dr Jitendra Singh took up the proposal with Gadkari citing two significant grounds for naming Chenani-Nashri tunnel on the name of Shyama Prasad Mukherjee.
First, tunnel across Banihal in Kashmir has been named as Jawahar tunnel on the name of Jawahar Lal Nehru and Second, Mukherjee had sacrificed his life in Jammu and Kashmir for the cause of State, which has been fulfilled 66 years after his martyrdom, sources said, adding the reasons have gone well with the Union Minister for Surface Transport and National Highways and he has approved to the proposal and will issue an order in this regard shortly.
When contacted, Dr Jitendra Singh recalled that Shyama Prasad Mukherjee enjoyed special place in Udhampur-Doda Parliamentary constituency, which is represented by him now for second consecutive term, as he was arrested at Lakhanpur and driven during night from Chenani-Nashri area to Srinagar, where he was kept in solitary confinement.
Sources said following withdrawal of special Constitutional provisions of Jammu and Kashmir by abrogating Articles 370 and 35-A and bifurcation of the State into two Union Territories of J&K and Ladakh, the naming of Chenani-Nashri tunnel before Shyama Prasad Mukherjee will be a significant decision as this will be first project of the State to be kept on the name of Jan Sangh ideologue.