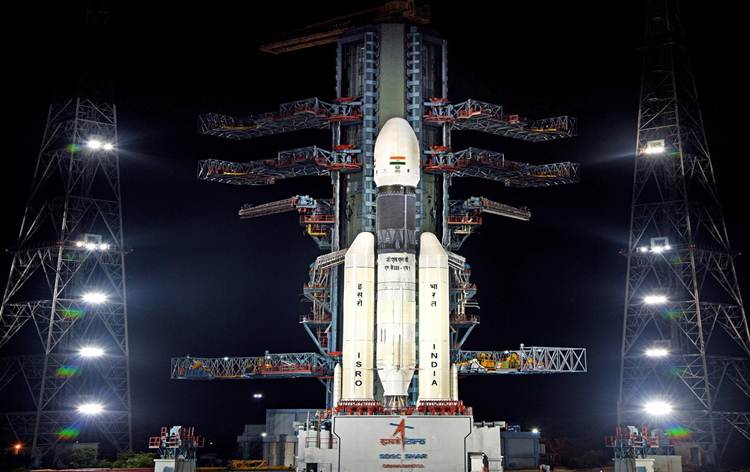 CHENNAI: The Lunar Orbit Insertion of the Chandrayaan-2 spacecraft,
launched from the SHAR Range in Sriharikota on July 22, would be carried out on
Tuesday, for a scheduled soft landing on hitherto unexplored frontier—Moon’s South
Polar Region—on September seven.
Scientists of the Indian Space Agency will fire the spacecraft’s liquid engine to insert
Chandrayaan-2, which had successfully entered the Lunar Transfer Trajectory on
August 14, into the Lunar Orbit between 0830 hrs to 0930 hrs tomorrow to raise its
orbit to 118 x 18,078.
ISRO sources said, ever since its launch by the GSLV MKIII-M1 vehicle, the spacecraft’s
orbit was progressively increased five times from July 23 to August six, before entering
the Lunar Transfer Trajectory.
The health of the spacecraft was being continuously monitored from the Mission Operations
Complex (MOX) at ISRO Telemetry, Tracking and Command Network (ISTRAC) in Bengaluru
with support from Indian Deep Space Network (IDSN) antennas at Byalalu, near Bengaluru.
All systems onboard Chandrayaan-2 spacecraft are performing normal.
After insertion into the Lunar orbit, there will be four orbit manoeuvers to make the spacecraft
enter into its final orbit passing over the lunar poles at a distance of about 100 km from the
Moon’s surface.
As per the schedule, on entering the lunar orbit tomorrow, the orbit would be
raised to 118 x 18,078 by firing the engine between 0830 hrs to 0930 hrs and
on August 21 it would be further raised to 121 x 4,303 between 1230 hrs and
1330 hrs.
Three more lunar orbit raising manoeuvers would be carried out on August 28
(0530 hrs to 0630 hrs-Orbit 178 x 1,411), August 30 (1800 hrs to 1900 hrs, orbit
126 x 164) and on September one (1800 hrs to 1900 hrs, orbit 114 x 128).
Subsequently, the Vikram lander will separate from the Orbiter on September two.
Two orbit manoeuvers will be performed on the Lander before the initiation of
powered descent to make a soft landing on the lunar surface on September 7,
which ISRO Chairman Dr K Sivan said would be experiencing ‘15 minutes’of
terror’.
After the successful launch, Chandrayaan-2, carrying an Orbiter, Lander (Vikram)
and Rover (Pragyan), commenced its 3.844 lakh km, 48-day long journey for a
soft landing on the Moon’s South Pole.
Weighing 3,850 kg, Chandrayaan-2 was carrying 13 Indian Payloads (eight on Orbiter,
3 on Lander and two on Rover) and one passive experiment from NASA.
While the technical difficulties of landing on the Moon’s South Polar region have deterred
many previous attempts, Chandrayaan-2 will be the first to reach this part of the lunar
surface—taking the Indian Tri-colour where no human has been before.
The lunar landing has been planned for September seven, about three weeks after the
spacecraft nears the Moon and starts orbiting it.
The second lunar mission was earlier scheduled for July 15, bu the launch was deferred
after technical snag was observed in the launch vehicle system at one hour before the
launch. After rectifying the snag, the mission took place on July 22.
As per the new timeline, the Earth-bound phase was increased by six days to 23 days
(earlier it was 17). As per the old schedule the Lunar Orbit Insertion (LOI) was to take
place on Day 22, but now it will be on Day 30.
The Lunar Bound Phase (LBN), which under the previous launch schedule was to have
taken 28 days, has now shrunk to just 13, between Day 30 and Day 42 after lift-off.
The Lander-Orbiter Separation will be executed on Day 43, while de-boosting will be
initiated on the 44th Day with the powered descent of the Lander and Rover on Day 48
to the lunar surface, which ISRO Chairman Dr Sivan said is highly complex and will be
experiencing “15 minutes of terror.”
It is crucial for ISRO to land during this window, as the touchdown will be done at the
high plain between two craters, Manzinus C and Simpelius N that will be at a point
facing the Earth and would have started receiving sunlight by then.
(agencies)