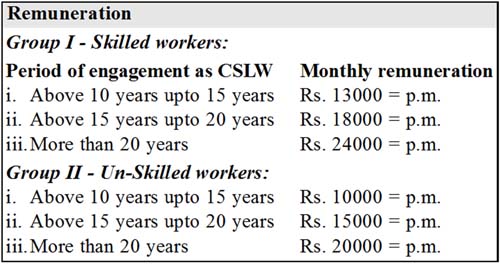 No pay scales, no DA, 3% increment

Excelsior Correspondent
JAMMU, Dec 21: About 60,000 casual, seasons and other workers (CSLW), whose ‘regularization’ was announced by Chief Minister Mehbooba Mufti and other top brass of the State Government including Finance Minister Dr Haseeb Drabu, will not be treated at par with other State Government employees and paid only monthly remuneration.
The workers, who will be called as the ‘Government Services Assistant’ (GSA), will be regularized for payment of monthly remuneration only after 10 years of service, and they would continue to get only monthly remuneration till they reach the age of retirement i.e. 60 years. They will not be paid any kind of Dearness Allowance (DA) but mere 3 per cent annual hike on consolidated remuneration.

CLICK HERE TO SEE FULL SRO
This was revealed in detailed SRO No. 520 issued by the Finance Department today.
Only those CSLWs would be regularized, who have been engaged up to 17.03.2015 i.e. when powers to make such engagements were withdrawn by the Government. The SRO that banned the engagement of workers would remain in force.
“The CSLWs would be entitled to regular engagement after completing 10 years of continuous services with effect from January 1 of the year following which he completes the prescribed period of regular engagement,” the SRO said.
The un-skilled CSLWs will be paid just Rs 10,000 per month between 10 to 15 years, Rs 15,000 above 15 years and up to 20 years and only Rs 20,000 after 20 years. The skilled workers will be paid Rs 13,000 per month between 10 years up to 15 years, Rs 18,000 above 15 years up to 20 years and Rs 24,000 after more than 20 years.
The SRO revealed that there will be no pay scales, DA, HRA, CCA or other such benefits, which are applicable to the State Government employees. They will just get an annual hike of 3 per cent of their consolidated remuneration on last day of calendar year with effect from January 1 of the following years. However, they will be covered under NPS along with employer’s share to be contributed by the Government.
The conditions laid down for so-called regularization of the CSLWs including that the workers should be state subject of J&K, possess minimum educational qualification of 8th standard or above, one the date of their initial engagement, their age should be within minimum/maximum age limit as prescribed for appointment in the Government service, they must have completed 10 years of continuous working, they must be continuing in the department as on date and their conduct must be satisfactory and no disciplinary proceedings are pending against them.
“The provisions of Article 35-A of the J&K Civil Service Rules will apply to a CSLW in respect of determination and verification of age. The concerned Administrative Department will have the powers to grant relaxation in the age/qualification for regular engagement of a CSLW on case to case basis,” the SRO read.
The Government would set up an Empowered Committee in the Finance Department to recommend creation of commensurate positions called GAS after proper scrutiny of proposals from the concerned Departments.
The Administration Secretary, Finance would be Chairman of the Committee. The Members will included Administrative Secretary of the concerned department or Representative now below the rank of Special Secretary, Administrative Secretary GAD or Representative not below the rank of Special Secretary, Administrative Secretary, Law, Justice and Parliamentary Affairs or Representative not below the rank of Special Secretary and Director (Codes), Finance Department.
The NYC workers will initially be re-engaged on the wages, which were paid to them before their disengagement. The orders of their re-engagement will br issued by the Youth, Services and Sports Department. The NYC workers will be entitled to regular engagement strictly on the pattern of a CSLW on the completion of prescribed period of continuous service after clubbing their service rendered earlier as the NYC workers.
“The land donors, who have donated their land free of cost to the Government, will be eligible for engagement as casual workers on the recommendations of a Committee to be constituted by the concerned Administrative Departments and to be headed by the concerned Administrative Secretary.
“The cases of land donors, who have donated land after 31.12.2001 up to coming into force of these Rules only will be considered. The minimum land donated should be one kanal of proprietary land and it should be legally mutated in favour of the State Government,” the SRO said.
It added that the left out adhoc/contractual/consolidated workers, who were not entitled to regularization under the provisions of J&K Civil Services (Special Provisions) Act, 2010, will also be considered for regular engagement at par with casual, seasonal and daily rated workers subject to fulfillment of eligibility criteria.
Regarding Hospital Development Fund and Local Fund Workers, the rule will mutatis mutandis apply to them subject to fulfillment of prescribed eligibility criteria. However, they will continue to be paid from Hospital Development Fund/Local Fund and the enhancement of their remuneration will be subject to availability of resources in the respective funds.