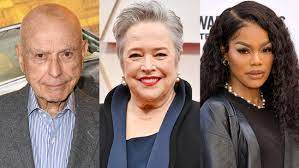 Los Angeles, Sept 20: Hollywood veterans Kathy Bates and Alan Arkin have joined the cast of Oscar winner Casey Affleck’s upcoming movie “The Smack”.
According to entertainment news website The Hollywood Reporter, actor-singer Teyana Taylor has also boarded the cast of the indie heist thriller.
David M Rosenthal, known for thrillers “The Perfect Guy” and “Jacob’s Ladder”, will direct the movie, which will also feature actors Marisa Tomei, Isabel May and Yul Vazquez.
“Smack” follows a con man (Affleck) who has hit rock bottom when he meets an upstart hustler (Taylor).
“After a tip from a wise con (Arkin), the two of them head to LA to pull off the biggest scam of their lives… But they learn they aren’t the only ones looking for the money, with a list of schemers including his ambitious ex (Tomei).
“As the con unfolds, the man can’t figure out if he and the woman are actually falling in love or being set up for the ultimate grift,” the official plotline read.
Rosenthal and Keith Kjarval have penned the script for the movie, set to start shooting later this year.
Kjarval, who runs the indie banner Unified Pictures, will produce the project along with Sam Rockwell, Play Hooky’s Mark Berger and Sugar Rush Pictures’ Andrea Bucko.
Executive producers include Ben Ruffman, Tom Lasally, Will Rowbotham, Doug Grozelle, and Shane David Goenfield. (PTI)