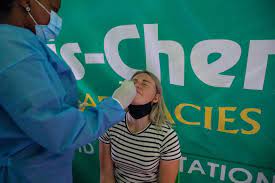 Ottawa, Dec 13: Amid criticisms over travel ban being imposed by countries on South African nations, Canada has dropped its travel rule that rejected Covid-19 tests from South Africa and required the Canadian travellers to get tested from third countries.
Under the new policy announced on Sunday, the third-country rule has been dropped for Canadians travelling from South Africa on all airlines for the next four weeks, effectively ending the ban on South African tests ? although the travel ban for non-Canadians will continue, The Globe and Mail reported.
This comes amid World Health Organization’s condemnation of the rule as it was “unfair and irrational snub of laboratory science” in South Africa, where the first case of Omicron variant was found.
Respect is owed to the science and technology expertise in African countries as well as their transparency and sharing, including data related to the Omicron variant,” Tedros Adhanom Ghebreyesus, director-general of the World Health Organization said.
In late November, Canada had banned foreign travelers from 10 African countries and the Canadian citizens were allowed to enter the country only after getting negative Covid-19 tests from third country in transit.
This proved almost impossible to do, stranding many Canadians and forcing others to spend time in Ethiopia to seek tests, in defiance of official Canadian warnings about the dangers of visiting the Horn of Africa country where civil war is raging, The Global and Mail reported.
The Government has not cited any reason for the change in its travel policy.
(UNI)