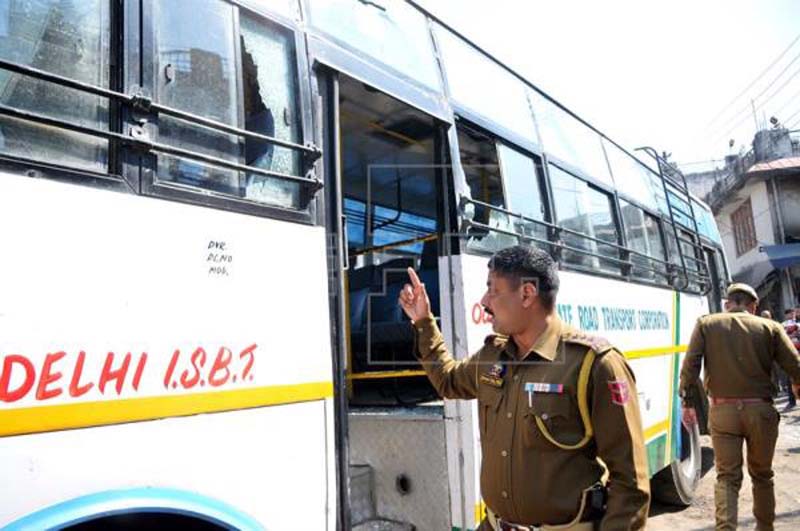 Police in touch with Kulgam counterparts

Excelsior Correspondent
JAMMU, Mar 8: As death toll in yesterday’s grenade blast at General Bus Stand reached two, police arrested another suspect of South Kashmir from Chenani in Udhampur district when he was trying to escape to Kashmir after staying mysteriously in Jammu and was reportedly in touch with the Hizbul Mujahideen militant, who had lobbed the grenade.
Police sources said they got specific information that another suspect from South Kashmir had reached Jammu along with Yasir Javed Bhat alias Arhan, who had lobbed the grenade at Bus Stand yesterday morning and was arrested in the evening from Nagrota when he too was trying to return to South Kashmir.

Click here to watch video
The suspect has been identified as Showkat Ahmad Bhat of Kulgam district in South Kashmir.
Police said they developed some leads during questioning of Yasir and investigations of Bus Stand grenade blast, which indicated that Yasir might have been helped by another associate. Some clues were gathered and finally Bhat was detained from Chenani on Jammu-Srinagar National Highway when he too was trying to return to Kashmir from Jammu, like Yasir Bhat.
No recoveries have been made from Showkat so far. However, he was being questioned to ascertain his involvement in Bus Stand blast or whether he was on another mission to Jammu.
Both Yasir and Farooq were being questioned jointly.
Police had specific inputs that the militants could carry out couple of grenade blasts in Jammu City targeting crowded areas. These inputs had also pointed towards involvement of Hizbul Mujahideen militants from South Kashmir.
Some more arrests in this case especially from South Kashmir were not ruled out. Jammu Police was in touch with their Kulgam counterparts in this connection.
Meanwhile, another civilian early today succumbed to the injuries sustained by him at General Bus Stand Jammu, in the Government Medical College, where he was admitted after the blast. He has been identified as Mohammad Riaz son of Mohammad Amin, a resident of Mattan, Anantnag.
Yesterday, 17-year old tailor, Mohammad Shariq son of Intezar, a resident of Uttarakhand had died in the blast.
Thirty-two injured were undergoing treatment in the Government Medical College, Jammu and condition of two of them was still critical.
Farooq Ahmad Bhat alias Umar, a Hizbul Mujahideen district commander was stated to be the mastermind of the blast in Jammu, sources said.
Police said all mobile telephones, which were active at General Bus Stand Jammu at the time of blast and before that yesterday, were being scrutinized to ascertain whether some other militants or Over Ground Workers had helped Yasir Javed in executing the grenade attack at the Bus Stand.
However, they added, Yasir had specifically been directed by his handler, Farooq Ahmad Bhat alias Umar not to use mobile telephone. Yasir was without a phone and was carrying only a tiffin with him. He had taken food from the tiffin during the intervening night of Wednesday and Thursday when he had left Kulgam from Jammu and after triggering the blast.
Meanwhile, the Border Security Force (BSF) today arrested a Pakistani intruder from the International Border (IB) in Ramgarh sector of Samba district.
The intruder has been taken into custody by the BSF for questioning to ascertain his motive. His identity was not known immediately.
Meanwhile, a mischief was reported from outside the Jammu Airport this afternoon when some unidentified persons threw a plastic toy fitted with battery and wrapped in a cloth at the road.
An alert was immediately sounded and Bomb Disposal Squad was called to the spot. However, it turned out to be a plastic device.
Police felt that some persons had committed mischief.

AK rifle snatched from DC’s PSO
Militants tonight snatched AK-47 rifle and 90 rounds from Daleep Kumar, Personal Security Officer (PSO) of Deputy Commissioner Kishtwar, Angrez Singh Rana, from his rented house at Asrarabad near Government Girls Higher Secondary School Kishtwar.
SSP Kishtwar Shakti Pathak told the Excelsior that two militants entered the rented room of Daleep Kumar, a police constable of District Police Lines (DPL) Kishtwar, posted with the DC Kishtwar as PSO tonight, and decamped with his AK-47 rifle and 90 rounds.
The militants were equipped with a gun and didn’t give any chance to Daleep to react.
Pathak said massive search operations have been launched in entire Kishtwar town to nab the militants, responsible for the rifle snatching.
This was second militancy-related incident in Kishtwar in little over four months.
On November 2, 2018, the militants had gunned down prominent BJP leader Anil Parihar and his brother Ajit Parihar. The NIA is yet to announce a breakthrough in the killings.