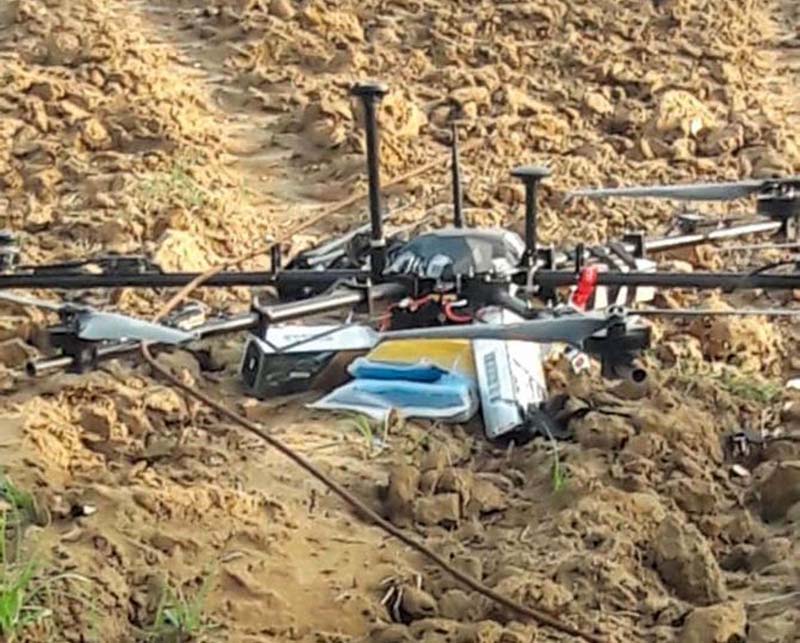 Excelsior Correspondent
JAMMU, Apr 24: The Border Security Force (BSF) today foiled Pakistan’s attempt to airdrop arms and ammunition by drones along the International Border (IB) when alert troops opened fire on two such flying objects on entering Indian airspace in Arnia sector in Jammu district.
Both the Unmanned Aerial Vehicles (UAVs) were spotted hovering between Jabowal and Vikram Border Out Post (BOP) between 4.30 am and 4.45 am in Arnia sector early today and returned to Pakistani side after the alert BSF personnel fired around 15 rounds in an attempt to bring them down, official sources told the Excelsior.

Click here to watch video
They said Pakistan is using drones to drop weapons and drugs with the latest attempt coming at a time when there is peace on the borders in Jammu and Kashmir after India and Pakistan agreed to uphold the 2003 ceasefire agreement from the intervening night of February 24 and 25.
“Despite the existence of a ceasefire agreement between Pakistan and India, Pakistan Rangers did not stop their nefarious activities against India and carried on with their ill motives on IB in Jammu.
“Today alert BSF troops in Arnia foiled drones intrusion bid by Pakistan. Two drones/UAV were observed entering from the Pakistan side and were immediately fired upon by vigilant BSF troops, compelling them to retreat back to Pakistan territory,” Deputy Inspector General of BSF S P S Sandhu said in a statement here.
Sandhu, who is also Public Relations officer BSF Jammu, said the BSF intelligence branch was receiving inputs about possible use of drones by Pakistan for ferrying arms and ammunition into India.
Accordingly, the troops are on alert and the border domination was exponentially increased, the officer said.
He said Pakistan Rangers have been regularly violating the IB through drone intrusions and trying to drop arms and ammunition in Indian territory but BSF have successfully repulsed such attempts in the past.
Last year on June 20, BSF shot down a Pakistani hexa-copter drone with a payload of five-and-a-half kilograms including a sophisticated US-made M4 semi-automatic carbine and seven Chinese grenades at Pansar border outpost in Kathua district.
Soon after the successful foiling of the drone intrusion attempt, the BSF officials said the whole area had been cordoned off and a search operation was carried out to ensure that there was no dropping from the drones before returning to Pakistan.
However, nothing objectionable was found on the ground so far, the official of the border guarding force said.
Earlier also, the BSF had successfully foiled several attempts by the militants backed by the Pakistani Rangers to smuggled arms, ammunition and explosives into India breaching the International Border in Jammu and Kashmir as well as Punjab.