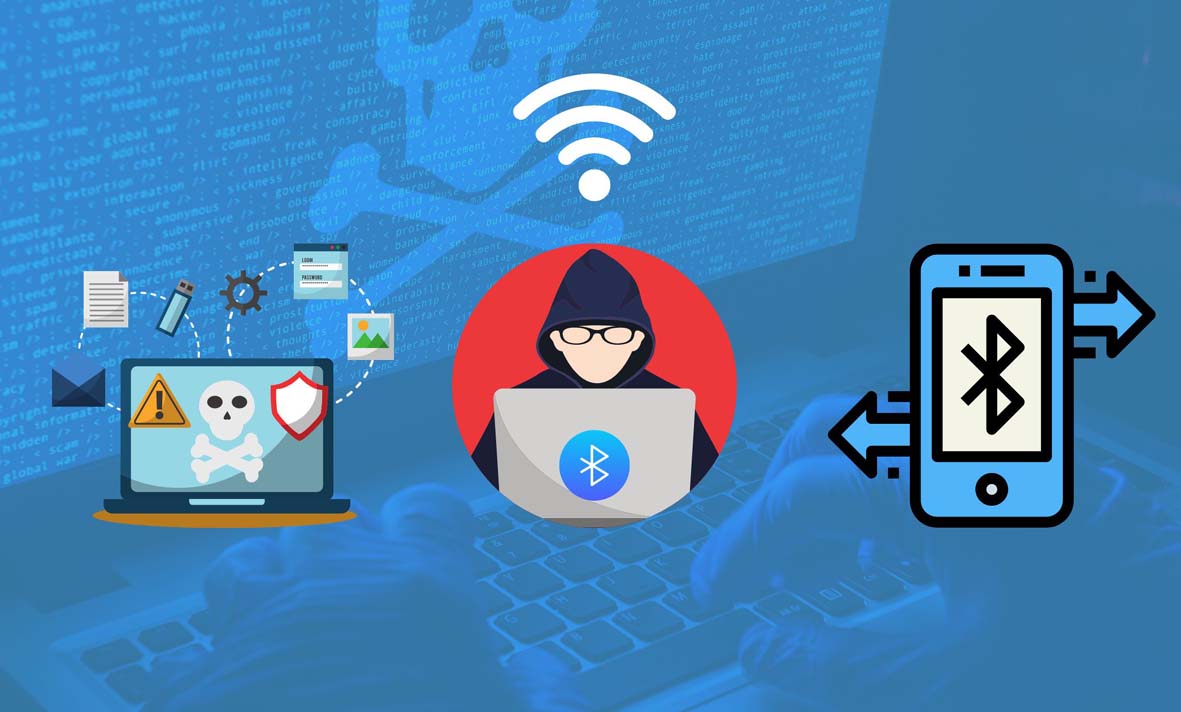 Rahul Dogra
Bluetooth is an incredibly convenient technology that allows us to connect our devices wirelessly. But, while it’s a great tool, there are some security concerns associated with its use. In recent years, hackers have been exploiting Bluetooth vulnerabilities to gain access to phones and other devices. This phenomenon is known as Bluebugging.
Bluebugging is a cyber attack technique that enables hackers to gain access to a person’s phone or device using Bluetooth technology. This type of attack has been around for many years and aGerman researcher named Martin Herfurtwas the first to have coined the term “Bluebugging” when he identified how hackers accessed laptops equipped with Bluetooth functionality. The hackers’ focus then switched to personal computers, smart watches, smartphones, and other such devices. It can be used to take control of the device and intercept data such as voice calls, text messages and emails.
Bluebugging takes advantage of certain weaknesses in Bluetooth technology that allow hackers to take control of a device without the user knowing or consenting. They can do this by sending out malicious codes sent silently over the airwaves which then penetrate the target device’s operating system and give them full access. With this access, a hacker can eavesdrop on communications, steal personal data like passwords or credit card numbers, and even listen in on conversations taking place near the hacked device! Furthermore, bluebugging can allow attackers to install malicious software on your phone or device that gives them complete control over it until you remove it manually.
Not only does this put users at risk for identity theft or financial loss, but it also puts their privacy in jeopardy as their every move becomes vulnerable to the hacker’s will.

How to Protect Yourself from Bluebugging

It is important for anyone using a Bluetooth-enabled device to understand how bluebugging works and how best to protect themselves from such an attack. There are several steps that can be taken to reduce the risk of bluebugging, including limiting the range at which your device can connect with other devices, only connecting with trusted sources, and disabling Bluetooth when not in use. By taking these steps it is possible to significantly reduce the chance of falling victim to a bluebugging attack.
Disable Bluetooth When Not In Use
The first step to protecting yourself from bluebugging is to disable your Bluetooth whenever you’re not actively using it. This can be done quickly and easily by going into your device’s settings and switching off the Bluetooth connection. When you are finished with whatever task requires your Bluetooth, be sure to re-enable the setting right away. While this may seem like an inconvenience, it is a necessary step to ensure that no one else will have access to view or control any data stored on your device through its wireless connection.
Change Device Name & Pin Code
Bluebugging is a serious security risk to your phone and can be prevented by taking a few simple steps. Step 2 of protecting yourself from bluebugging is changing the device name and pin code on your phone.
The device name of your phone is what shows up to other devices when you attempt to connect with them via Bluetooth or Wi-Fi. It’s important to change it from the original, generic setting so potential attackers will not know what type of device they are trying to access. Likewise, changing the pin code on your phone will make it more difficult for anyone trying to gain unauthorized access. It’s best practice to set up pins that are 8 digits in length and contain both letters and numbers for maximum security.
Regularly Update Software & Drivers
It is essential to regularly update software and drivers on all devices. Doing so ensures that any new security vulnerabilities are patched and the system remains secure from outside threats. Additionally, updating your software and drivers helps maintain compatibility with other devices to ensure data can be shared securely between them. It’s also important that all users keep their operating systems up-to-date with the latest patches to protect against threats such as malware and viruses. By staying vigilant and taking proactive steps like these, users can help guard against bluebugging attacks and keep their data safe.
Use Antivirus Software
Using Antivirus Software is a crucial part of protecting your smartphone from bluebugging. Antivirus software will detect malicious files that are sent through Bluetooth connections and prevent them from infecting your device. Additionally, it can help you identify vulnerable devices in your vicinity so that you don’t become the target of an attack. This step is easy enough for anyone with even basic technological knowledge to complete and can make all the difference when it comes to preventing bluebugging attacks.
Avoid Connecting to Unknown Devices
To stay safe from this type of attack, users should take precautionary measures and avoid connecting with any unknown devices.
Additionally, users should regularly check the list of paired devices on their phone and remove any unfamiliar ones they may have connected with in the past as an extra layer of protection. Disabling auto-pairing also helps protect against bluebugging as it ensures that only authorized connections are made by the user.
Use Strong Passwords
Passwords are one of the most important parts of IT security, so it’s essential to use an effective password strategy when trying to protect your system from malicious activities like Bluebugging. The longer and more complex the password, the harder it will be for hackers and other malicious actors to gain access. To ensure optimal security, passwords should contain a combination of upper and lowercase letters, numbers, and special characters. Additionally, users should also avoid using personal information in their passwords such as birthdates or names as these types of data can be easily guessed. It’s also important to not share your passwords with anyone else, even if you trust them; doing so could lead to someone accessing your system without authorization.
Use Encryption Technologies
Encryption technologies are one of the most effective ways to prevent bluebugging and protect confidential information. Encryption is the process of encoding, or rewriting, data using a mathematical algorithm so that it becomes unreadable to anyone without access to the corresponding decryption key. Encrypting data can help reduce confusion and ensure that only those with permission can view its contents. When used properly, encryption technologies provide an extra layer of security against intruders who may try to intercept or monitor communications over Bluetooth networks.
When setting up encryption for Bluetooth devices, users should make sure they select a secure protocol such as AES-128 or WPA2-PSK (TKIP). This ensures that any eavesdropping attempts are unsuccessful because the encrypted data will be completely indecipherable even if intercepted by an attacker.
In conclusion,bluebugging is a serious security threat that can be easily prevented by taking the necessary precautions. By understanding how bluebugging works and the risks it poses to your device, you can create a barrier of protection to keep your device safe. Utilizing anti-virus software, disabling Bluetooth when not in use and keeping devices up to date with the latest security patches are all effective methods for thwarting malicious attackers.