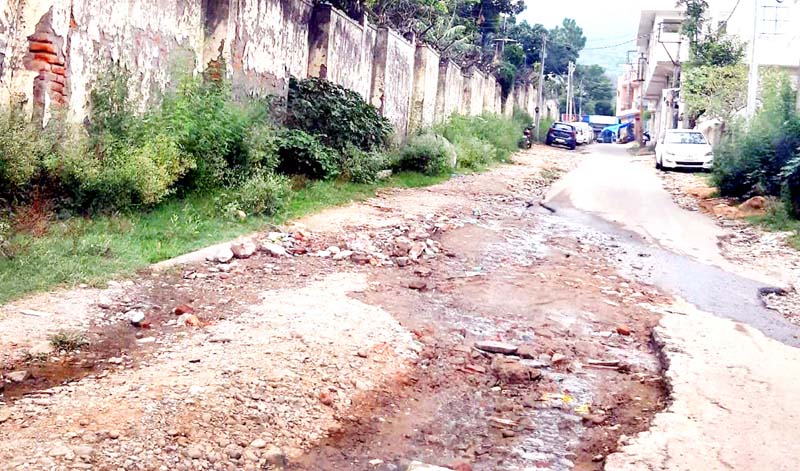 Also called in simple parlance as macadamizing of roads which means providing a layer of crushed light stones in a cohesive form to the roads to absorb wear and tear and shed water to the drainage ditches on both sides of the roads . This process, as we see is probably the last stage of constructing of a new road or repairing the already existing one. In both the capital cities of the UT of Jammu and Kashmir, since decades as a routine or as a tradition, on comparative basis, the position of roads and their maintenance has always been the focus of the attention of the Government. Hence every successive Government had been trying to keep roads in somewhat better form. That precisely stems from certain factors like roads having been the only mode of connectivity in and inter Jammu and Kashmir areas since the other fastest and cheap mode of Railways was either not available or later available only for longer inter-state destinations until a few years ago when some skeleton services in Kashmir valley were started to provide additional inner connectivity between certain areas. Moreover, tourism and for strategic purposes, movement through roads has a particular significance for Jammu and Kashmir areas. We do not , however, dispute that more and more roads are not constructed and connectivity strengthened across Jammu and Kashmir but in those instances where road construction reaches up to the final stage of macadamizing , they are either left out or the process postponed due to various factors but not without leaving behind a trail of problems for the general public to face.
Leaving, as such, roads without black -topping for whatever period, lot of difficulties are encountered by the commuters including the vehicle owners as in such conditions, humpy points , potholes and uneven surfaces create traffic disruptions and jams besides thick clouds and palls of dust emerging add to the problems. Dust becomes a serious problem when it is dry climate but the pressure created under the moving vehicles, in normal course too, sucks dust from the road surface .In Kashmir valley, particularly a few roads that got partially damaged due to rains and snowfall during winter months continue to remain unrepaired and not macadamised in time. Roads connecting interiors of the twin cities are perhaps no body’s concerns although residential colonies and even some educational institutions/ offices are in the interiors of the cities also or bulk of population , therefore, have to face problems on account of poor roads. The problem is not confined to cities only but many districts in Jammu and Kashmir especially in southern and northern regions of Kashmir valley have damaged roads on account of winter rains and snowfall in the same condition without any repairs and upper surfaces blacktopped.
There are various factors responsible like timely and frequent surveys not made by the concerned UT Department of Roads and Buildings to know the condition of roads especially inner roads needing repairs. Secondly, decisions are taken late in respect of time consuming process of floating tenders and allotting work contracts for repairing and black-topping of roads. Thirdly, like we saw in the past when many roads were repaired/ macadamised but without having regard for proper procedural formalities / prior sanctions from the concerned authorities or absence of budgetary allocations resulting in the bills tendered by the contractors not passed for payment who had to run from pillar to post for more than two years to have their bills passed thus spreading out a sort of mistrust by the intending working contractors in the system. Fourthly, patch working repairs of low quality and compromising with the quality standards , ostensibly done intentionally, lead to recurring bad shape of the roads in Srinagar and Jammu capital cities. Last but not least, frequent digging of roads by various agencies like water, telephone, R&B department , power, municipalities etc and leaving ‘malba’ around lead all to subsequent deterioration of roads especially when dug out patches get filled with accumulated rain and drains water. We expect the repairing work and of good quality to be started soon but in any case much before the rainy season sets in which is not far away.