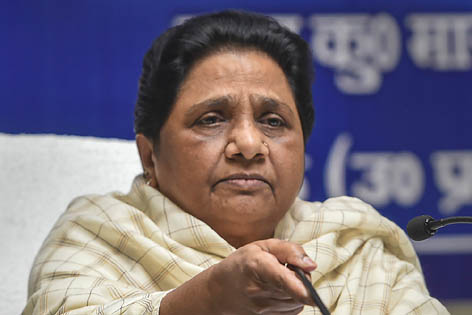 LUCKNOW, Dec 23:
Bahujan Samaj Party (BSP) chief Mayawati on Thursday accused the opposition parties of painting a communal colour to the upcoming elections and stressed on the necessity to warn people against such designs.
She also urged the Supreme Court to take notice of the alleged illegal land deals near the upcoming Ram Temple in Ayodhya.
“The opposition parties, including the BJP, Samajwadi Party and others, are busy painting a Hindu-Muslim colour to the elections to hide their shortcomings. The BSP people will have to go to every village and every house to warn the people. This task must begin now,” Mayawati, who has convened a meeting of in-charges of all the 18 divisions and all 75 district presidents to review poll preparations, told reporters.
Taking a dig at the BJP’s claims of winning more than 300 seats, the former chief minister asked why in that case were the saffron party’s senior leaders, ministers and the chief minister going all out making announcements, laying foundation stones and launching “half-baked” projects in the state, just before the elections.
Mayawati said the SP, too, had been following a similar pattern and that the public was smart enough to realise this.
To a question on newspaper reports about relatives of BJP leaders and government officials allegedly purchasing land illegally near the Ram Temple project in Ayodhya, the BSP supremo said the Supreme Court needs to take note and order a high-level inquiry into it.
“It is a very serious matter. My party would want the Supreme Court to take notice and if the allegations are true, the state government needs to get the deals cancelled,” she said.
The Uttar Pradesh government has on Wednesday ordered a probe by the revenue department into the case.
On the passage of the bill to link Aadhaar with the voter ID in Parliament, Mayawati said it was the Centre’s responsibility to conduct an open debate in both Houses prior to passing it.
“Our party does not agree to this,” she said.
Mayawati said the people had seen all prominent parties in power in the state and expressed confidence that they will choose the BSP in the upcoming elections, as her party had “delivered the best” at all levels of administration. (PTI)