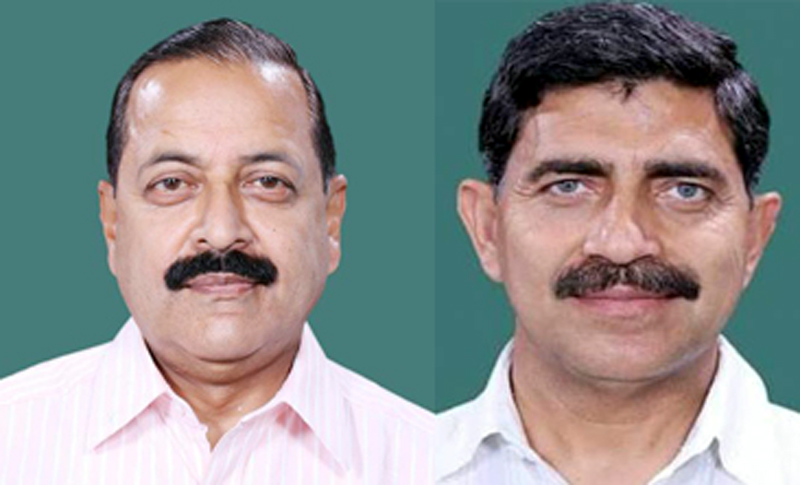 JAMMU, Mar 17: The BJP Central Election Committee is understood to have cleared names of its candidates for five Lok Sabha seats in the State and decided to stick with sitting Members of Parliament (MPs) Dr Jitendra Singh and Jugal Kishore from two Jammu seats but deferred the mandate for Ladakh constituency in the absence of consensus. The CEC directed the State party leadership to depute high-level team to Ladakh shortly to evolve consensus on the candidate and report back to it for approval of the name.
The BJP CEC headed jointly by Prime Minister Narendra Modi and party president Amit Shah reportedly cleared five names of the BJP candidates for six Lok Sabha seats of Jammu and Kashmir last midnight in the presence of BJP general secretary, Incharge Jammu and Kashmir, Ram Madhav, Avinash Rai Khanna, State president Ravinder Raina, Ashok Koul, State general secretary (organizations) and Kavinder Gupta, former Deputy Chief Minister.
However, an official announcement is expected to be made along with names of other States shortly. The BJP CEC can effect last minute changes in the list.
While reportedly clearning mandate for second time to Dr Jitendra Singh from Udhampur-Doda and Jugal Kishore Sharma from Jammu-Poonch Lok Sabha seats, both sitting MPs, the BJP is repoted to have approved names of Mohammad Maqbool War for Baramulla-Kupwara constituency, Sofi Yusuf, former MLC for Anantnag-Pulwama segment and Khalid Jehangir for Srinagar-Budgam seat.
Apart from Mohammad Maqbool War, the BJP had GM Mir in the Panel for Baramulla Parliamentary seat. In Anantnag, apart from Sofi Yusuf, the BJP leader Javed Qadiri was also in the Panel while for Srinagar constituency, in addition to Khalid Jehangir, Dr Ali Mohammad Mir was in the list.
However, according to BJP sources, the BJP had only single name of Dr Jitendra Singh and Jugal Kishore Sharma for Udhampur-Doda and Jammu-Poonch Lok Sabha seats and both of them will get mandate again. Initially, BJP State president Ravinder Raina was also in the Panel for Jammu-Poonch Parliamentary seat but he later opted out himself on the ground that he wouldn’t contest and instead help all six candidates in the fray and ensure maximum number of seats for the party.
Similarly, according to sources, the BJP had also kept the name of dissident leader Choudhary Lal Singh in the Panel for Udhampur-Doda constituency but later dropped his name.
The BJP had submitted names of Ladakh Autonomous Hill Development Council (LAHDC), Leh chairman, Jamyang Tsering Namgayal and Chering Dorjay, former Minister and sitting MLC for Ladakh Lok Sabha seat. However, the BJP CEC didn’t clear any name for Ladakh constituency and instead advised Ravinder Raina to depute high-level delegation to Ladakh to hold consultations with the party leaders there, evolve consensus and revert to the CEC.
Ladakh seat goes to polls in fifth phase on May 6 and, therefore, there was sufficient time with the party to finalize name of its candidate. The BJP CEC would approve the name for Ladakh seat after it was submitted again by the party after visit to Ladakh.
Ladakh Lok Sabha seat is quite significant for the BJP, which had won it for the first time in history in 2014 Parliamentary polls by razor thin margin of just 34 votes with Thupstan Chhewang being the winner. However, Chhewang had last year quit the BJP as well as Lok Sabha seat following “serious differences” with the party.
Recently, the State Government during Governor’s Rule, had conceded long pending demands of Ladakh including grant of divisional status and University.
BJP’s second time candidate on Udhampur-Doda Lok Sabha seat, Dr Jitendra Singh, the Union Minister of State in the Prime Minister’s Office (PMO) for last five years, had defeated former Chief Minister of Jammu and Kashmir and veteran Congress leader, Ghulam Nabi Azad in his electoral debut in 2014 by impressive margin of over 60,000 votes. Azad was later elected to the Rajya Sabha from Jammu and Kashmir and is presently the Leader of Opposition.
Jugal Kishore, who had won Nagrota Assembly seat twice for the BJP in 2002 and 2008, was elected to Lok Sabha for the first time in 2014 Parliamentary poll with a margin of about 3 lakh votes defeating two-time MP and veteran Congress leader, Madan Lal Sharma.
Party sources said the BJP reportedly decided to retain its both candidates for Jammu-Poonch and Udhampur-Doda Lok Sabha seats as it feels that they have done lot of developmental works in their constituencies.
In 2014, BJP had won Jammu-Poonch, Udhampur-Doda and Ladakh Lok Sabha seats while remaining three Lok Sabha seats from Kashmir region had gone to the PDP. However, in 2016, PDP leader, Tariq Hamid Karra had resigned from the party as well as Lok Sabha and later joined Congress while another PDP MP from Anantnag, Mehbooba Mufti, the party president had quit Parliamentary seat after being elected as the Chief Minister in July 2016. NC president Dr Farooq Abdullah was elected as Lok Sabha member from Srinagar in the by-poll in April 2017 while by-election to Anantnag seat was suspended and couldn’t be held since then.