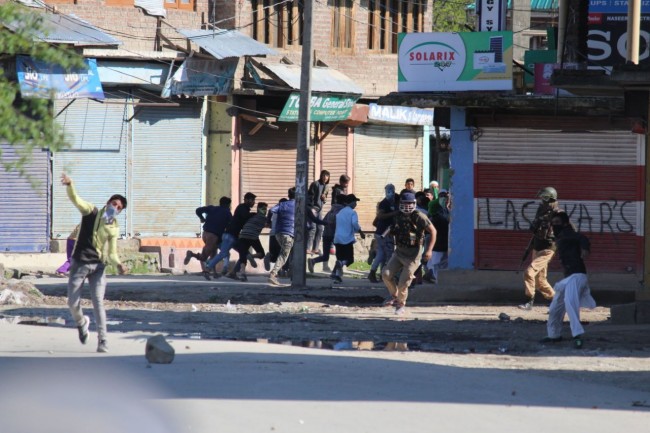 Excelsior Correspondent
SRINAGAR, Oct 8: Atleast 10 people, including a BJP candidate were injured during protests as shutdown called by separatists against holding of Municipal and Panchayat elections in Jammu and Kashmir disrupted life in the Valley.
The shutdown called by separatist leaders including Syed Ali Shah Geelani, Mirwaiz Umar Farooq and Muhammad Yasin Malik against holding of elections as they had called for boycott of these elections.
Clashes broke out in parts of the Valley as the first phase of Municipal and Local Body polls was held today in 83 Municipal Wards from 7 am till 4 pm. The authorities also blocked internet service in Srinagar and South Kashmir to conduct the polls.
In Lankreshipora village of Bandipora, a woman was injured when security forces used tear gas canisters and pellets to disperse anti-election protesters. Shabeena, wife of Javed Ahmad received multiple pellet injuries as security forces fired pellets to disperse the protesters.
Adil Ahmad Buhru, a BJP candidate from Ward 15 was injured when protesters threw stones at him near Dachigam Polling booth.
Clashes also erupted in Old town Baramulla, where angry protesters engaged security forces in pitched battles. However, no one was injured in the clashes.
In South Kashmir’s Anantnag district, protesters fought pitched battle with security forces in Janglat Mandi area. One person was injured as the security forces and protesters clashed in the area.
Clashes were also reported from many parts of the city outskirts, including Parimpora, Noorbagh, Bagh-e-Mehtab, Mochou and Kralpora.
At Kralpora, security forces lobbed tear smoke shells after failing to disperse anti-election protesters with baton charge. At least four youth were injured in the protests that continued for several hours.
In Parimpora and Noorbagh localities, three people were injured in the stone pelting protests.
Shops, offices, financial institutions and petrol pumps remained closed today in Srinagar and other parts of the Valley. The shutdown also witnessed thin movement of traffic on the otherwise busy roads.