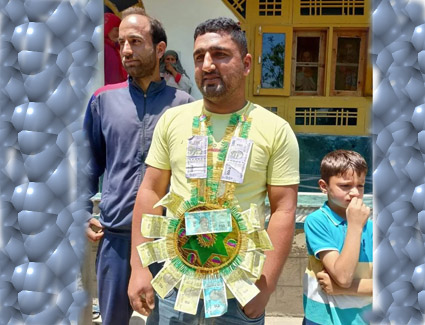 Excelsior Correspondent
Srinagar, May 22: Youth from South Kashmir Bijbehara has all of a sudden come into the limelight after he won Rs 2 crore on the online platform, Dream11.
Hailing from the Shalgam area of Bijbehara, Waseem Raja said that he was not aware of the luck having turned his way till he was called up by some of his friends informing him about the same.
“I was sleeping and didn’t know about it at all; my friends called and told me that I had figured at number one slot, paving a way for me to win Rs 2 crore,” he said.
It is to be noted here that Dream11 is an Indian fantasy sports platform that allows users to play fantasy cricket, hockey, football, kabaddi and basketball and earn rewards. The platform is a skill-based application that lets users win cash prizes as they play.
As soon as the news of Waseem winning the prize, which has now made him an overnight millionaire, spread, the residents of the area thronged his place to congratulate him.
“I cannot express my happiness, I am overwhelmed because we were in hardships and this money should ease it all for me; my mother is ill, and I will now be finally able to ensure she gets the necessary treatment; I thank God for whatever has come my way,” he said.
He said that for the last 2 years, he has been trying his luck on the application, which, he said, has finally transformed his life.
“It is a moment of pride for Shalgam as the same has made the area famous; almost everyone came and congratulated me-that was emotional,” he said.
While not giving details about what he was intending to do with the prize money, Waseem said that he will give priority to the treatment of his mother.
He also said that the parents should allow their children to try their luck on platforms such as Dream11. “One should try his luck once in a while because if it goes in the right direction, your life is set,” he said.