Patna (Bihar), August 10: Nitish Kumar was sworn in as the Chief Minister of Bihar for the eighth time at the Patna Raj Bhavan on Wednesday.
This came a day after a huge political turmoil in the state, after which he broke the alliance of Janata Dal-United (JD-U) with the Bharatiya Janata Party (BJP) and announced to form a new “Grand Alliance” which includes Tejashwi Yadav’s Rashtriya Janata Dal (RJD) and other Opposition parties.
The oath ceremony was attended by RJD’s Tejashwi Yadav and his wife Rajshri, former CM Rabri Devi and RJD leader Tej Pratap Yadav at the swearing-in ceremony at Raj Bhavan in Patna.
Meanwhile, Tejashwi Yadav also took oath as the Deputy Chief Minister of the state.
Seven parties including 164 MLAs along with independent MLA in our Mahagathbandhan, said Nitish Kumar at a joint presser with RJD’s Tejashwi Yadav after meeting Bihar Governor Phagu Chauhan on Tuesday. (Agencies) 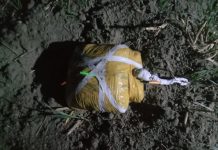