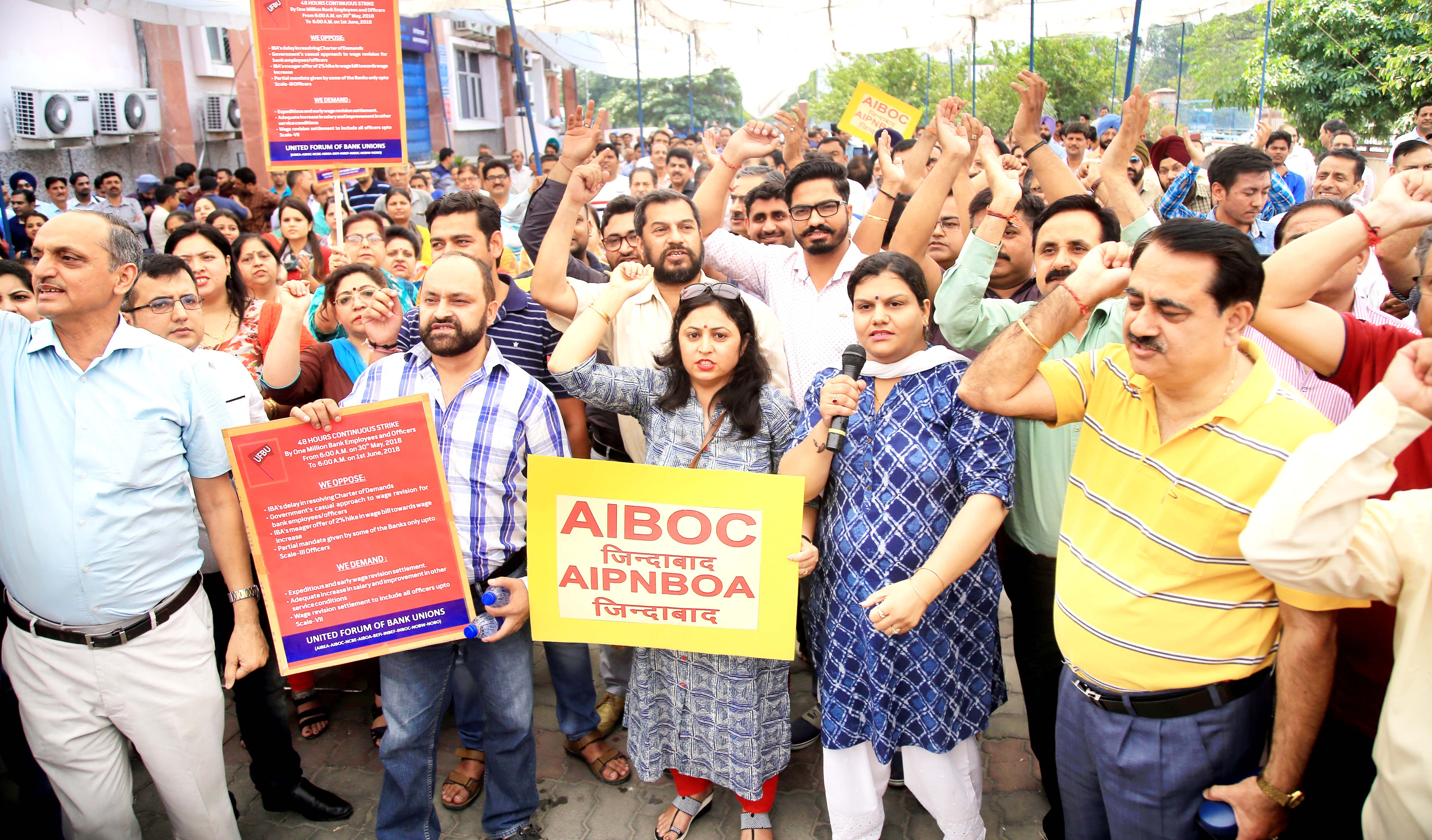 Excelsior Correspondent
JAMMU, May 30: Banking services across J&K were crippled today after bank officers and employees from the State joined the nation wide strike called by Union Forum of Bank Unions (UFBU) against 2 per cent proposed hike in salary.
All the public sector banks in the State joined the two-day nation wide strike by bankers in support of their demands. “All the bank branches in Jammu and Srinagar capital cities and other major cities and towns of the State remained closed. Striking employees took out rallies at different places and shouted slogans in support of their demands”, Suresh Wali, State secretary, All India Bank Officers’ Association (AIBOC), J&K, said.
However, private banks — including J&K Bank, ICICI Bank and HDFC Bank — were functioning normally. “All public sector banks were closed in the State in support of the two-day strike spearheaded by the United Forum of Bank Unions (UFBU), an umbrella body of nine unions,” the official said.

Click here to watch video
In Jammu, a massive demonstration was held at SBI Administrative Office, Rail Head Complex which was attended by bank employees and officers from all PSU Banks in the city. The agitators raised slogans against the Government and IBA and demanded immediate settlement of their demands. Addressing the demonstration, Suresh Wali, highlighted the vital role played by the banking industry in the economic growth of the country.
“Now banks are being roped in for Aadhar enrolment too, which is not at all a banking initiative, yet we are in the fore front for meeting the commitments of the Govt. But alas, when it comes to demanding our rightful increase in wages, which I’d justified and statutory, Government and IBA show complete apathy in meeting our demands”, he said and warned the Government that if the demands were not met in the near future, bank employees were prepared to go on an indefinite strike, without any fare of a wage cut which they face whenever they are on strike.
Meanwhile, due to the strike, customers of the PSU banks in the State had to face difficulties due to non-availability of services in the public sector banks while ATMs were also running fast out of cash with some of them already showcasing ‘out of cash’ boards.
Some people outside the State Bank of India (SBI) branch, Lal Chowk, alleged that they were caught unaware by the strike. “I have only minimum balance in by SBI account and wanted to deposit some money so that there was no problem when money gets auto-debited for Pradhan Mantri Jeevan Jyoti Bima Yojana (PMJJY). But as the banks are closed for two days and the money will be debited towards the scheme on Thursday from by account, I fear the bank will fine me for below minimum balance in my account,” Shabir Ahmad, a SBI customer, said.
Similar, concerns were raised by many other customers of different public sector banks. Some even claimed that their PMJJY policy will be lapsed as they don’t have sufficient balance in their account. “I had a medical emergency following which I withdrew all the money in my account on Monday. I only have Rs 152 in my account. Today I came to deposit the money in the bank but, due to the strike I was unable to do so. Now I fear that as there are insufficient funds in my account, the policy will lapse,” Rameez Khan said.
Meanwhile, banking operations were also badly hit in other parts of the country as 10 lakh employees, primarily from PSU banks, participated in the 2-day. The strike, also supported by employees of some old generation private sector banks and foreign banks, will continue tomorrow.
Since the strike coincides with the month-end, salary withdrawals from branches are likely to get affected. Some ATMs went dry by the evening. Operations like deposits, FD renewals, Government treasury operations, money market operations were hit by the strike.
A RBI official said some digital banking work was done through electronic systems like the RTGS but the functioning of banks’ servers was hit. Digital banking comprises about 5 per cent of the total operations, the official said. Reserve Bank of India remained operational though the trade unions offered moral support for the ongoing strike, a RBI Trade Union leader said.
As several rounds of talks between banks and the unions of their employees did not make any headway, the United Forum of Banking Unions (UFBU), an umbrella body of nine bank unions, has gone on strike against the proposed wage hike of 2 per cent as against 15 per cent given last time, All India Bank Employees Association (AIBEA), general secretary C H Venkatachalam said.
In the last wage revision in 2012, the bank employees got a raise of 15 per cent.