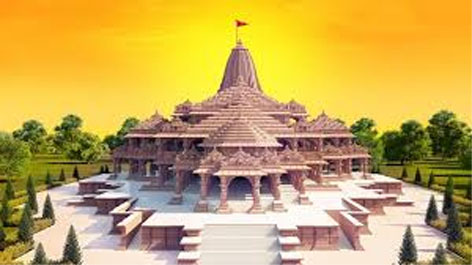 NEW DELHI: For the BJP which was once forced to keep the “contentious” Ram temple issue aside to woo allies, the beginning of construction of a grand temple in Ayodhya is an ideological victory over its rivals with even many opposition leaders welcoming the development.

Incidentally, the ground-breaking ceremony by Prime Minister Narendra Modi for the temple’s construction, in the presence of leading lights of Hindutva movement including RSS chief Mohan Bhagwat, will be conducted on Wednesday which coincides with the first anniversary of the annulment of Article 370, another key ideological plank for the saffron party.

It is only fitting, political watchers say, that Prime Minister Modi and Uttar Pradesh Chief Minister Yogi Adityanath will be the main political presence at the ground-breaking event, as both are known for their uncompromising commitment to the Hindutva cause.

Notably, Modi as a national office-bearer in the BJP played an important role in L K Advani’s ‘Ram Rath Yatra’ in 1990 while Adityanath’s late guru Mahant Avaidyanath headed the group of sadhus and Hindu organisations that was formed in 1984 to spearhead the temple movement.

If the Supreme Court’s verdict in November, 2019 in favour of building the temple at the site, where believers hold that Lord Ram was born, put a legal closure to the historical dispute between Hindu and Muslim groups, the beginning of its construction is likely to further consolidate Hindutva sentiments.

“For us, the Ayodhya issue had ceased to be a political issue long back. It was always a matter of faith for us, and our manifestoes in all general elections underlined our commitment to build the temple and also scrap Article 370. But, of course, now             that both promises have been fulfilled, we will talk about them,” a BJP leader said.

Though it was Vishwa Hindu Parishad under late Ashok Singhal which conceptualised the Ram Janmbhoomi movement in 1984 and began mobilising sadhus and Hindu groups nationwide, the issue gained political currency like never before after the then BJP president L K Advani started his ‘Ram Rath Yatra’ in 1990.

This had followed the party’s decision to come out openly in support of the temple’s construction, where the Babri mosque stood at that time before being brought down by frenzied kar sevaks in 1992, in its national executive meeting in Palampur in 1989.

Advani’s Rath Yatra was also seen as a counter to the Mandal politics aimed at reservation for Other Backward Groups unveiled by the V P Singh government in 1990.

Advani launched his famous ‘Rath Yatra’ from Somnath temple in Gujarat, drawing people in  thousands as his chariot rolled through the country’s heartland, at times triggering communal riots as well, while the movement gained momentum.

The demolition of Babri Masjid at the disputed site on December 6, 1992 made the party a pariah in politics for a while but could not stop its rise to power.

Keen to shun the tag of political “untouchable”, the BJP under Atal Bihari Vajpayee and Advani was forced to put the issue, considered contentious by most parties, along with Article 370 and the Uniform Civil Code on the backburner to make new allies, a necessity for coming to power in the coalition era between 1989-2014.

The party has been steadfast in its commitment to its core causes after Modi took charge of the party and brought it to power in 2014. This was the first time that the BJP won a majority in the 543-member Lok Sabha, making it immune to political pressures that its earlier government under Vajpayee often felt.

The party’s win in 2019 with an even bigger mandate has seen it pursue its core causes with a renewed vigour.

A day before the beginning of the temple’s construction, Congress leader Priyanka Gandhi Vadra hoped that the ground-breaking ceremony of the Ram temple in Ayodhya becomes a “marker” of national unity, brotherhood and cultural harmony.

She said for ages Lord Ram’s character had served as a source of unity for the entire Indian sub continent.

BJP’s Amit Malviya said that in the run up to the ceremony in Ayodhya, when “morally bankrupt secular” politicians are suddenly discovering their devotion for Lord Ram, it is imperative to remind that the BJP is the only political party for which construction of a grand Ram Mandir has been an article of faith. (AGENCIES)