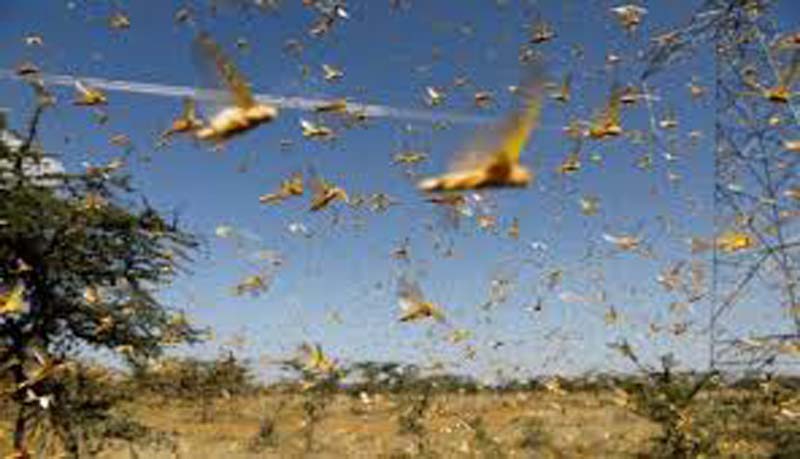 Sanjeev K. Sharma
JAMMU, June 2: Though Girdhari Lal Sharma-an elder at Khana Chak village on Indo-Pak border at R S Pura is busy these days with other farmers in planting paddy saplings, yet, the entire village is fully aware and prepared to counter any attack by locusts which have reached different parts of the country and can badly damage the crops.
“From news reports we daily learn about the locust swarms reaching different parts of the country but we at our end are fully prepared to save our crops from it as the insect destroys the crops badly,” Sharma told this reporter making a mention of different ways ranging from modern technologies of spraying insecticides to decades old method of beating drums, plates etc to make noise which forces the locust swarms to flee.
Some farmers opined that decrease in number of birds and rodents due to human interferences with nature has increased the danger of such insects destroying crops.
As chances of locusts visiting J&K are “rare” still the authorities concerned are also fully prepared to safeguard the crops from damage by the insect.
“For the last 20 years there has been no report of locust swarms reaching and attacking crops in Jammu though there might be some sporadic incidents involving localized attacks by a grasshopper type insect,” Dr. R.K Gupta, Vice Chancellor Sher-e-Kashmir University of Agricultural Sciences and Technology (SKUAST) said.
He further informed that few days back some border area farmers in R S Pura had spotted some localized grasshopper type insects, about few hundred in number, but it was not locust.
“As I remember, long back may be in nineties, the locust swarms had entered Ladakh from China side,” he informed adding that the flying insect does not give time to respond so prior preparations are a must as the locusts can destroy vegetation in one square km in just 2-3 hours by eating away all the leaves.
“Few days back we had a meeting with Naveen Chowdhary, Principal Secretary Agriculture wherein it was decided that SKUAST will constitute teams to aware and alert farmers on locust attacks,” the VC informed.
Dr. Gupta also said that SKUAST has taken all the precautionary measures including constituting of Locust Units at Krishi Vigyan Kendras (KVKs) for awareness and training of farmers.
“Entomology experts of SKUAST are giving technical supports to these Units,” he informed adding that instructions have been given to these Units to remain ready with protection equipments and sprays and contact municipality and fire brigades in cases of spotting any locust swarm.
The VC also said that local measures of beating drums and bursting fire crackers are also effective as these insects are very much sensitive and fly away from noises.
He said that locust had entered India by crossing Pakistan border from Rajasthan and then it moved with the direction of wind to reach Maharashtra and Madhya Pradesh.
“Now there are fears that it may cross Rajasthan to enter Punjab and Haryana after which it may reach J&K,” the VC maintained.
He informed that spraying insecticides using high pressure sprays, fire brigades and big pumps to kill the locust is the practice mostly used to counter these insects which can travel 150-200 kms in a day moving with the direction of wind.
When contacted, Director Agriculture, Inderjeet Singh said all the preparations have been done to prevent locust attacks on crops in Jammu.
“On our end, we are doing surveillance, monitoring of the situation, checking places which need chemical sprays and we also issue timely advisories in newspapers etc to aware farmers,” he said.